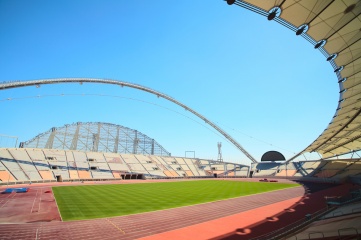 The Khalifa sports stadium in Doha hosted the 2006 Asian Games

The inaugural edition of the Asian Youth Athletic Championships will be hosted in Doha in 2015. The news, reported by the Gulf Times, was announced at the 78th council meeting of the Asian Athletics Association (AAA) in Doha.

“Long-term planning and grass-root level development should be our focus and we need to find ways to encourage the youth. That’s why we have decided to have an Asian Youth Athletic Championships next year,” AAA President General Dahlan Jumaan al-Hamad told reporters at the close of the event on Sunday.

The dates of the event have yet to be determined but it is likely to be hosted in May or June, as the IAAF World Athletics Championships take place in Beijing from 22-30 August. “It would be held before the World Championships so as to give our athletes the incentive to qualify,” Dahlan said.

The aim of the Asian Youth Athletics Championships is to boost the sport in the continent.

“Asia should change. We need to improve. We need to raise our level. The continent should be at the pinnacle of everything. We are working towards it, and it involves a lot of hard work and commitment. But we are confident we shall reach there," said Dahlan.

In addition to the leaders of AAA member federations, the meeting was attended by former pole vault world champion and IAAF Vice-President Sergei Bubka.

It was also announced that selection trials for the 2014 Youth Olympic Games (YOG) would be held in the Thailand capital of Bangkok from 21-22 May. The YOG takes place in the Chinese city of Nanjing in August 2014.

The 2015 Asian Youth Athletics Championships event adds to Qatar’s growing programme of sports events. The Gulf nation will be hosting the World Men's Handball Championship in January and February 2015. The UCI Road World Championships is scheduled to take place in 2016, with a potential shift from September to October due to the climate.