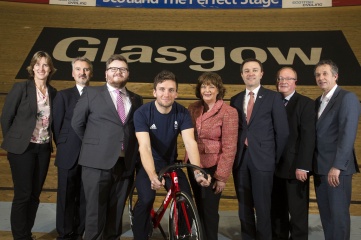 The 2023 Cycling World Championships in Glasgow, Scotland will be the biggest ever cycling event (Photo: VisitScotland)

[Source: UCI] The 190th Congress of the Union Cycliste Internationale (UCI) – an electoral Congress - was held on 24th September in Leuven (Belgium) during the 2021 UCI Road World Championships that are taking place in Flanders and mark the centenary of the event. The UCI Congress brought together representatives of 95 of the UCI’s member National Federations.

President of the International Federation since the UCI Congress held in Bergen (Norway) in September 2017, David Lappartient was re-elected in Leuven for a second term of four years at the head of the institution. As the only candidate, he was re-elected by acclamation.

The UCI Congress also had the responsibility of holding the election for members of the new UCI Management Committee, who will serve on the Federation’s executive for the next four years. The elected members are (by Confederation then in alphabetical order where relevant):

For the Asian Cycling Confederation (ACC)

For the Oceania Cycling Confederation (OCC)

* until the election of the new President of the Commission by its members between November and December 2021.

At a ceremony organised during Congress, participants discovered the different UCI World Championships for the 2022-2027 period attributed earlier in the week by the UCI Management Committee. In total, the names of host cities for nine UCI World Championships – for a total of seven countries and five disciplines – were revealed:

The announcement that the 2025 UCI Road World Championships are awarded to the capital of Rwanda means this will be a first appearance in Africa of the UCI’s annual flagship event. It is a decisive step in the organisation of this historic event which featured among the major objectives of the UCI’s Agenda 2022.

The Congress approved the 2020 UCI Annual Report, which contains the audited consolidated financial statements for the UCI and the UCI World Cycling Centre (WCC). At more than 40 million Swiss francs, the reserves of the two entities at the end of 2020 remained almost unchanged compared to 2019, despite the Covid-19 pandemic. The Congress also approved the UCI’s 2022 budget as well as an updated forecast for 2021. The UCI’s projected reserves over the new Olympic cycle were also presented to Congress. They show prudent growth in reserves through to 2024 and at the same time increasing funds available for the development of cycling worldwide.

The Congress also approved a modification to the UCI Constitution to increase the number of Vice-Presidents from three to four, and to ensure they include at least one representative of each gender.

Participants at Congress were informed of the delivery status of all objectives in the UCI’s Agenda 2022. Much progress has been made: as of the end of September 2021, close to 80% of the 300 objectives communicated have been totally or almost entirely achieved.

Congress participants welcomed the award of the UCI Bike City label to the city of Sakarya (Turkey) by the Federation’s Management Committee earlier in the week. This label is in recognition of the quality of each recipient’s strategy for developing and promoting everyday use of the bike, and of their commitment to organising events on the UCI International Calendar. Sakarya joins the 14 cities and regions that already hold the UCI Bike City label.

Sakarya hosted the 2020 UCI Mountain Bike Marathon World Championships, a round of the 2021 UCI Mountain Bike Marathon series, as well as a round of the 2020 UCI BMX Supercross World Cup. The Sakarya Metropolitan Municipality has developed a 10-year action plan and is investing heavily to become a city that not only hosts championships, but also ensures bikes are used more actively in transportation, encourages people to lead healthier lives, and promotes a cycling culture. Dedicating approximately 15% of the total annual budget to cycling, it has developed multiple cycling infrastructures and programmes, including the multi-disciplinary Cycling Valley, protected bicycle paths, traffic parks, road safety programmes, children’s cycling programmes and various events for the public.

Finally, the Congress awarded the UCI Merit, a distinction rewarding those who have made a remarkable contribution to cycling, to:

Mr Fazli Ahmad Fazli (AFG), President of the Afghanistan Cycling Federation, for his courageous commitment to the development of cycling, notably women’s cycling, in a country where fighting for this cause is a risk.

Mr Philippe Leuba (SUI), Head of the Department of Economy, Innovation and Sport in the canton of Vaud - which houses the UCI headquarters and UCI World Cycling Centre (WCC) - for his efforts alongside the UCI to welcome to the UCI WCC, people threatened in Afghanistan due to their passion for cycling with no barriers.

Mr Tom Van Damme (BEL), member of the UCI Management Committee and President of the Royal Belgian Cycling League (RLVB) for his constant commitment to the development of cycling at international level.

The UCI President David Lappartient declared: “I would like to whole-heartedly thank the National Federations affiliated to the UCI for renewing their confidence in me by electing me for a second term of four years. I look forward to continuing my work at the head of world cycling. After achieving a large majority of the objectives in the Agenda 2022, I now mean to work with our members to establish an Agenda 2030 whose goals will shape the future of cycling in the medium and long term.

I would also like to extend a welcome to the new members of our Management Committee that now includes considerably more women, with Ms Daniela Isetti, Ms Agata Lang, Ms Sonia Gregoria Ramos Acuña and Ms Anne Gripper. I am convinced that we will work together effectively for the development and promotion of cycling.

“I welcome the attribution of the 2025 UCI Road World Championships to Kigali, in Rwanda. Staging our biggest annual event in Africa was one of our dreams. Today, this is nearer to becoming a reality. I sincerely thank Tangier and Morocco for their bid of very high quality. The UCI encourages the country to submit new bids for future events. Given its love of cycling and its commitment for the development of our sport, it deserves to welcome major UCI events.”

Meeting for an extraordinary session after the Congress of the Union Cycliste Internationale (UCI) organised during the 2021 UCI Road World Championships in Flanders (Belgium), the newly elected Management Committee carried out the election of the Federation’s Vice-Presidents for the next four years. In line with a modification to the UCI Constitution approved earlier in the day by its Congress, the UCI now counts at least one Vice-President of each gender, for a total of four Vice-Presidents (compared with three previously). The Vice-Presidents elected are:

Their term begins immediately and will finish after the 2025 UCI Congress.

The extraordinary meeting of the Management Committee also decided to bring in a co-opted member to the UCI Management Committee: Ms Yuan YUAN (CHN), Vice-President of the Asian Cycling Confederation and Deputy Secretary General of the Chinese Cycling Association.

It also confirmed Ms Amina Lanaya in the position of Director General of the UCI.

The President of the UCI David Lappartient, re-elected during the Congress, declared: “I would like to congratulate my four Vice-Presidents for their election, and I look forward to working with them over the next four years.

“With the election of Ms Yuan Yuan to the UCI Management Committee, it now has six women members out of 18, as opposed to just one after the previous elections. This is a major step towards more equal gender representation in the governance of cycling, which is one of the UCI’s priorities.

“I would also like to thank Mr Renato Di Rocco, who has been one of my Vice-Presidents since 2017 until this week, after occupying this role for the first time between 2009 and 2013. His support, his experience and his extensive knowledge of cycling have been precious throughout the many years he has served our sport.”