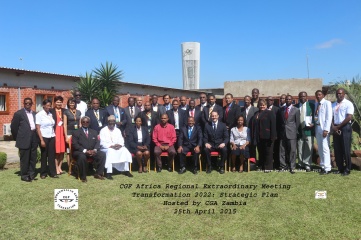 On his way to Durban, CGF chief executive David Grevemberg met with 18 African CGAs in Lusaka to discuss Transformation 2022

Durban, the only city bidding for the 2022 Commonwealth Games, is being subjected to full scrutiny as the Evaluation Commission conducts a full technical assessment of the bid this week.

“We want to show the rest of the world that even the cities of South Africa can stand side by side with the great cities of the world,” said Gideon Sam, president of the South African Sports Confederation and Olympic Committee (SASCOC).

“We will see this as an African dream and the coming together of Africa.”

Over four days this week, the Evaluation Commission and Bid Committee will visit several venues, analyse and learn more about the technical aspects of the bid and meet with the government and city partners essential to delivering the Games.

“As a Commonwealth Sports Movement, we cannot fail to be excited by the prospect of a first Commonwealth Games in Africa, and warmly welcome Durban and South Africa’s bid and congratulate the Durban Bid Team and their local and national partners for all the hard work they have put in so far,” she said.

“This Evaluation Commission, however, has a very important job to do – to analyse and gain a deeper understanding of the technical aspects of the bid and hear firsthand the plans and strategies that will be put in place to deliver an inspiring and inclusive Games for everyone in seven years time. To borrow the bid team’s slogan, we are Ready to be Inspired.”

Addressing the Bid Committee at the start of the visit, she said “Our intention is to work with you and support you, to evaluate the current developments and help optimise them in partnership and in preparation for their endorsement by the CGF General Assembly in September.”

She added that the Commission intends this week “to be the beginning of a candid, collaborative and constructive partnership”.

“We will be working with the Evaluation Commission to clarify and strengthen the city’s bid,” said Mark Alexander, Chairman of the Durban Bid Committee on Monday.

“We are expecting robust discussion and debate from the Evaluation Commission, but we are confident that our bid is well-grounded, sustainable and will stand up to the most vigorous scrutiny.”

Bid Committee CEO Tubby Reddy added: “There is no doubt that we have put up a quality bid which will far exceed the expectations of the CGF. We have been meticulous and sensitive to all the demands from the City as well as from the CGF, and we believe that Durban has produced a world-class bid.

“Our belief in bringing the Games to Africa remains firm and very optimistic.”

Durban’s bid will be voted on by all 71 nations and territories of the Commonwealth Games Federation membership at their General Assembly on 2 September 2015.

The Evaluation Commission will prepare a Bid Evaluation Report to present to the CGF membership no later than one month before the General Assembly.

On the way to Durban, CGF chief executive David Grevemberg visited the IOC’s Sport for Hope Centre in Lusaka, Zambia to meet with 18 Commonwealth Games Associations (CGAs) from African nations as part of a Commonwealth-wide consultation with the CGF membership on Transformation 2022, the Commonwealth Sports Movement’s ambitious agenda for growth and innovation.

“Transformation 2022 aims to place athletes, and the transformational impact of their achievements and performances on citizens and communities, at the heart of the Federation’s vision. And there is no better place to have such powerful discussions than in the incredible sporting continent of Africa,” said David Grevemberg in Lusaka.

“This is a defining moment for our African colleagues, as they unite to support the ambitions of Durban and South Africa in their bid to host an inclusive and inspiring Commonwealth Games in 2022. It is also a defining moment for the Commonwealth Sports Movement, as we plan ambitiously for the future and develop and deliver Transformation 2022 in partnership with our members”.

“The CGF provides a unique arrangement bringing diverse nations together for a common cause - sport. The Commonwealth Movement embraces unity and humanity, impacting citizens and communities across our region and this is critical to foster mutual collaboration and prosperity through sport.”