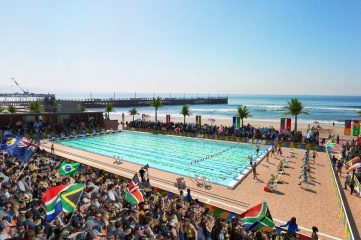 The CGF Evaluation Commission commended many features of the bid including the "attractive coastal strip" (Photo: Durban 2022 / Facebook)

Durban’s “attractive” Commonwealth Games bid should not be formalised until a financial guarantee is provided, according to the CGF Evaluation Commission

The Commonwealth Games Federation (CGF) Evaluation Commission has recommended that the CGF General Assembly votes for Durban, the sole bidder for the 2022 Games, on 2 September, but that the Host City contract should not be signed until a “critical” financial guarantee is provided.

On publication of the CGF Evaluation Commission Report on Monday, commission Chair Louise Martin said “We are 95% there, and very close to the finish line. We thank our colleagues in Durban and South Africa for their passion, ambition and assurances that many of our comments and requirements will be actioned in time for the vote.

“It is our recommendation that the CGF General Assembly votes to award the 2022 Commonwealth Games to the Host City of Durban, South Africa, but subject to the final and timely delivery of a limited number of outstanding Host City Contract requirements”.

However, the report said it was “critical” that a financial guarantee must be in place before a Host City contract is signed.

“The guarantee covering a potential financial shortfall was not received at the time the Report was finalised, but is expected to be submitted before the General Assembly. This is a critical requirement,” the report stated.

"The Bid Committee is continuing to work across the three levels of government to secure the guarantee and has advised that the requirement will be achieved. The Ministerial support enjoyed by the bid is also noted.

“However, should this guarantee not be received prior to the CGF General Assembly, it is recommended the signing of the Host City Contract be deferred until the Guarantee is provided.”

The commission proposed that this must be resolved within 90 days of the General Assembly.

The report praised SASCOC’s leaders in gaining “strong engagement from and the support of the three levels of government (city, province and national)”, but said the formation of a cross-government committee is essential.

“The critical coordination role anticipated for the proposed (but not currently constituted) Inter-Ministerial Committee needs to be enabled by an effective cross-government delivery coordination entity, with a focus on integration of government and city support for the Games and the assurance of legacy programmes,” the report said.

“This should be supported by a clearly-defined set of roles and responsibilities for the various government departments, public authorities and other entities that will have a role in the planning and delivery of the Games.”

The commission proposed that this issue be resolved within 180 days of Durban’s appointment as Host City, along with clarification of “integrated development and financing arrangements to ensure delivery of all venues”.

The report also laid down requirements concerning the athletes village. “Delivery obligations, land ownership and funding arrangements need to be fully documented to remove any risk for the future Organising Committee… Durban 2022 is required to confirm to the CGF that the Village design principles and standard of amenity required by the CGF will be met… within 180 days of appointment as Host City.”

The report also commends and highlights the many positive impacts of Durban’s bid for the Games.

“Durban’s vision supports and contributes to South Africa’s 2030 National Development Plan and is rooted in the desire to engage citizens (especially young people), athletes and the Commonwealth,” the CGF said in a press release.

The report acknowledged that “the CGF should provide more direct and active support for Durban 2022” in line with the CGF’s Transformation 2022 objectives.

The CGF resolved to “By Q2 2016, and enshrined in the 2022 Host City Contact, establish a Games Delivery Partnership model that positions the CGF and Host CGAs as delivery partners and supports financial, operational and reputational efficiencies and outcomes”.