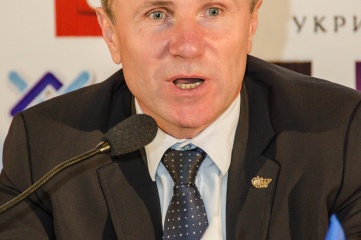 As President of the Ukraine National Olympic Committee, Sergey Bubka is a figurehead of Lviv’s bid for the 2022 Olympic Games (Photo: Igor N Gapchich / Shutterstock.com)

As violence between protesters and government forces escalated in Kiev, police stated on Thursday that protesters had taken over regional administration headquarters including Lviv, which is bidding to host the 2022 Winter Olympic Games.

Speaking at a press conference in Sochi, IOC communications director Mark Adams said of the conflict, “Those are terrible scenes. The Olympic Truce is an important symbolic thing for us.”

The Olympic Truce was established in antiquity between the host city state and its neighbours to ensure safe delivery of the Olympic Games. It was revived in 1993 by a UN resolution and in 1998 the IOC called upon all nations to observe the Truce.

“I’m not sure it plays much part in what’s going on there [in Ukraine]. But clearly we hope the situation will be solved as quickly and with as little bloodshed as possible,” said Adams.

As the ceasefire broke, Bubka tweeted: "I want to bring Olympic Truce to my country. Our athletes are competing hard in Sochi, but peacefully and with honor. Violence has no place in the world."

Bubka, whose 21-year-old pole vault world record was broken in the Ukrainian city of Donetsk on 16 February by Renaud Lavillenie, is a crucial figurehead of Lviv’s bid for the 2022 Games.

He announced on his website: “I'm shocked by what is happening in my native country – especially because the violence is taking place during the Olympic Games – the world’s most peaceful and democratic event.

“I am once again urging all parties to stop the violence! There is no 'their' Ukraine, or 'your' Ukraine. It is OUR Ukraine. For the sake of the future of our kids let's do everything possible to get back to negotiations and make a compromise.

“I am now in Sochi and I know that our Olympic athletes who compete for the glory of Ukraine fully support me.”

A total 45 athletes from the Ukraine travelled to Sochi 2014. However, BBC journalist Richard Conway tweeted on Thursday that up to half of these Olympians had returned home because of “unrest in their country.”

Several media outlets reported that Ukrainian skier Bogdana Matsotka pulled out of the Games in protest at the use of force in Kiev. On Thursday, the Ukrainian Health Ministry said 28 people had died and 287 had been hospitalised during the standoff between police and protesters in Kiev. Ukraine’s Interior ministry confirmed that security forces had opened fire on protesters.

Black armbands in the Olympic Village

Meanwhile, a request from the Ukrainian Olympic Committee for their athletes to wear black armbands in memory of those killed was rejected by the IOC.

“The answer was received from the IOC that in accordance with the Olympic charter it is not possible to do this.”

Instead, Ukrainian athletes attached black armbands to the national flags hanging from their balconies in the Olympic Village.

IOC President Thomas Bach expressed his sympathy for the Ukraine and his admiration for its Olympians. "I would like to offer my condolences to those who have lost loved ones in these tragic events," he said.

"Our thoughts and sympathy are with the Ukrainian team at what must be a very difficult time. The way they have continued to represent their nation with great dignity is a credit to them and their country.

"Their presence here is a symbol that sport can build bridges and help to bring people from different backgrounds together in peace.”