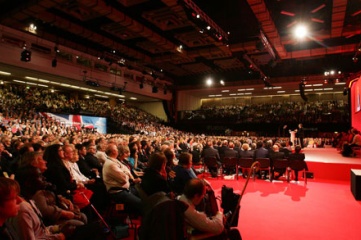 The Brighton Centre will host the autumn 2016 conference of Liberal Democrat party members.

The number of Liberal Democrat party members has shot up by a third, to reach more than 60,000, since the party’s heavy losses in the May 2015 general election, which left the party with just eight members of parliament.

The governing Conservative Party is holding its 2016, 2018 and 2020 conferences in the Birmingham International Convention Centre (ICC), after Manchester Central hosted its 2015 conference. Conservative party membership is around 150,000, according to the latest estimates.

The Labour Party, which has the largest membership of more than 200,000, will hold its 2016 and 2018 conferences at ACC Liverpool.

The Scottish National Party, which now has the third largest representation in Westminster parliament after the Conservatives and Labour, is hosting its 2015 conference at the Aberdeen Exhibition and Conference Centre. SNP membership has grown 300 per cent since the Independence Referendum of September 2014, when Scotland narrowly voted against independence.