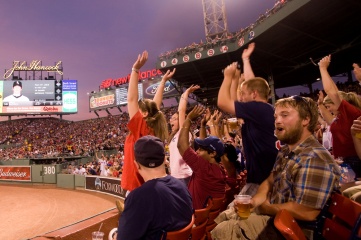 Poll indicates that more than half of people support a bid for the 2024 Olympic Games, unless it comes at a cost to the taxpayer

The majority of Massachusetts residents support Boston’s bid for the 2024 Olympic and Paralympic Games, as long as the bid comes at no cost to the taxpayer.

This is the finding of an independent poll conducted by Sage Consulting on just over 1,600 people in the state of Massachusetts.

While the results of the poll showed overall support for the Games bid, at 55 per cent, it also revealed that a more pronounced majority of 61 per cent are opposed to public spending on the project.

The poll also showed that more people were sceptical about the economic legacy of the Games than those who believed it would bring lasting benefit.

The most popular response to the question “how strongly do you support or oppose the bid” was “strongly support”, with 35 per cent ticking this box. With 20 per cent saying they “somewhat support” the bid, the poll showed an overall majority of 55 per cent supporting the bid.

Support for the bid would not necessarily translate into ticket sales, however. Just 45 per cent of respondents said they would either “definitely” or “probably” attend the Games in person.

Slightly more people believed that Games expenditure was “unlikely” to produce lasting benefit for Boston (46 per cent) than those who said this was “likely” (49 per cent).

In answer to the question about “lasting economic benefit for Boston”, the largest group of respondents (29 per cent) said that this was “very unlikely” while 19 per cent thought it “somewhat unlikely”.

This means 48 per cent of people thought economic benefit was unlikely, as compared to 44 per cent that deemed it to be likely.

The strongest opinions revealed by the poll were in response to questions about the financing of bidding for and hosting the Games.

43 per cent of respondents would “strongly oppose” the use of “taxpayer dollars” to fund the bid. Coupled with the 18 per cent who “somewhat oppose” this, the poll reveals that a clear majority of 61 per cent are opposed to public finance of the project.

Boston’s bid is planned to be financed privately and, if successful, the bid committee has pledged that any infrastructure projects relating specifically to the Games will be entirely privately financed, However, the poll indicated that 55 per cent believe that “financial support for the Olympics will come at the expense of other worthwhile causes,” as compared with the 23 per cent who believe “most costs will be carried by business”.

Public support for the Olympic Games is an important metric on which the bid will be evaluated and the overall support for the bid at this early stage will be seen as a positive.

A recent gathering of opponents to Boston’s bid, organised by “No Boston Olympics”, attracted little more than a hundred people.

The US Olympic Committee has been quick off the blocks in announcing Boston as its contender for the 2024 Games, with only Rome the only confirmed competitor.

Germany is expected to put forward either Berlin or Hamburg. A number of other cities and countries are said to be contemplating bidding, including Baku, Budapest, Doha, Istanbul, Paris and South Africa.