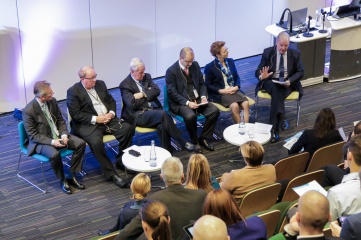 Host City 2017 kicked off in Glasgow on Tuesday with more event owners, hosts and organising committees attending than ever

Host City, the world’s largest meeting of cities and sports, business and cultural events, took another major step forward this week, recording its greatest participation yet and with the announcement that the event will be returning to Glasgow in 2018 with a greatly increased exhibition.

Host City 2017 was opened by the event’s Chairmen, Paul Bush OBE, Director of Events at VisitScotland and Sir Craig Reedie CBE, IOC Member and President of the World Anti-Doping Agency.

Paul Bush OBE said: “It is great to see so many city representatives, event owners, organising committees and events practitioners in Glasgow for this fantastic conference. While it is an exciting time for the industry with all the technological advancements and the rise in social media allowing events and audiences to be more engaged, it is also a very challenging time. The current security climate, the transparency and governance around the bid process, as well doping and corruption in sport, are all adversely affecting the confidence the public has in bidding for and delivering of major events. This year’s Host City programme has provided the ideal opportunity to tackle these challenges head on and ensure we maintain public support for high impact events around the world.

“That said, I’m delighted Host City will be returning to Glasgow in 2018 and shows the continued positive impact hosting high impact events can have when you have a strong legacy plan in place to build on the success. The return of Host City for a fourth consecutive year is a real endorsement and clearly shows the legacy that’s been built from hosting the 2014 Commonwealth Games and the work Glasgow has done to re-positioned itself as an events and tourism city.”

Sir Craig Reedie said: “Host City 2017’s debate on High Impact Events, with panels and discussions on practically every aspect – the size of the city, safety, technology, entertainment and others – is interesting in the extreme.

“When Host City comes back to Glasgow in 2018 we can expect even more interest and attendance than this year, which is this best attended yet.”

Conference Director Ben Avison said “We are delighted to be returning next November to Glasgow and Scotland, where Host City has developed so rapidly over the last three years. With the incredibly high standard of participation this year, we look forward to a great flourishing of the exhibition space in 2018 around this peerless, world class conference of cities and cross-sector events.”

For further information on the panel sessions and other world class speakers for Host City 2017, please visit: www.hostcity.com