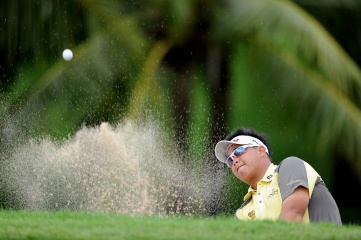 The Asian Tour will host a new tournament in Dubai

Golf’s Asian Tour will venture into the Middle East for the first time with the announcement that Dubai will play host to the organisation’s final event of 2014 in December.

The Asian Tour has agreed a three-year deal to host the ‘Dubai Open’ with Golf in Dubai, which has run the European Tour’s Dubai Desert Classic since 1989 and also organises the Dubai Ladies Masters tournament and the MENA Golf Tour.

Golf has become a key component of Dubai’s ambitious drive to host 20 million visitors annually by 2020 – the year in which the city will host the World Expo.

The Asian Tour said talks with prospective sponsors and different Dubai golf clubs are at an advanced stage, adding that Golf in Dubai will soon announce the official title, venue and dates of the newest tournament in the city.

Hailing the new event as an “important stop” on the calendar, Asian Tour chairman Kyi Hla Han said: “With so many prestigious tournaments, in particular the Omega Dubai Desert Classic, happening out there, the city is ideally placed to capitalise on its unique position as a diverse and high quality golfing destination.

“The Asian Tour is delighted to be coming to Dubai and I am sure our players will be very excited to compete in this new and exciting event in December. As a players’ organisation, the Asian Tour is represented by an eclectic mix of the finest players from across the region and internationally and we look forward to entertaining golf fans in Dubai.”

Mohamed Juma Buamaim, vice-chairman and chief executive of Golf in Dubai, added: “Events like this will continue to strengthen our strong historical ties with Asia. Dubai’s economy benefits both directly and indirectly from golf tourism, and there is a positive synergy between golf and the key tourism sectors. Golf is just one of the many reasons that people visit Dubai to savour the experience of playing on courses of international standard.”

Today’s news comes after it was announced last month that a new tournament in Mauritius will become the first tri-sanctioned event to be endorsed by the sport’s European, Asian and Sunshine Tours.

The three Tours, which are all founding members of the International Federation of PGA Tours, confirmed that the AfrAsia Bank Mauritius Open will take place at the Heritage Golf Club on the island from May 7-10, 2015.