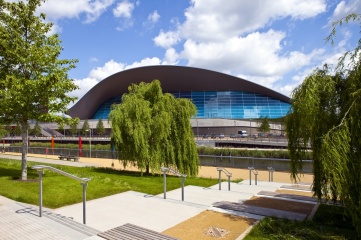 The Aquatics Centre located in London’s Queen Elizabeth Olympic Park was built for legacy and modified for the Games (Photo: chrisdorney / Shutterstock.com)

Agenda One: Event Delivery
The first agenda is to deliver the Games; that is non-discretionary and something you have to do. The cost is given and it’s mandatory, because it’s the IOC requirements and there’s national pride involved and a number of other considerations.
The cost of this has been remarkably constant over the last 15 years – around US$2.5bn to US$3bn. But that’s covered by income from IOC contributions, local sponsorship, ticket sales and merchandise so there is no net cost.

Agenda Two: Sporting Legacy
The second agenda is leaving a sporting legacy. That is partly mandated by the IOC requirement, but you have some leeway on how you do that. So you have a choice of whether your stadiums and arenas are permanent structures, which always runs the risk of being white elephants, or temporary or demountable structures – or even, according to Agenda 2020, you can move it to another city.
For example, if you don’t have a velodrome you have to deliver one somehow. And if you do it correctly, that can be a legacy – but there are lots of examples of not being a legacy: The Athens 2004 Games is the prime example of white elephants and a complete horror story.
The main issue with this second agenda is that venues should be designed for legacy and enabled for Games. Most people do it the other way round and then there’s a rush to modify it for legacy.
A positive example is the aquatics centre in London; we worked very closely with Zaha Hadid on that. It was designed to be a community swimming pool with 2,500 seats. Temporarily, those wings were built – they looked absolutely awful, but they were functional and it ended up being an Olympic-compliant aquatics centre of 17,500 seats. It was designed for legacy and enabled for the Games temporarily.

Agenda Three: City Legacy
The third agenda is what you want to use the Olympics for and our advice to any city or region that wants to host the Games is that you first have to decide what you are going to use the Olympics for. And if you don’t get that right, you run into a lot of problems about public acceptance of the Olympics as a project.
This is where discretion comes into play. It cost London GB£1.8bn just to make the Olympic park into a building site. London made that call because it wanted to use the Olympics to regenerate part of East London. The city didn’t have to do it; they chose to do it because otherwise it would never happen; it would still be a dump with remnants from the blitz, asbestos, oil and corpses.
A bad example is Sochi. A lot of what happened in Sochi had nothing to do with the Olympics. It cost US$55bn, but only a fraction of that was Olympic costs. They wanted Sochi to be a tourist destination and they also wanted to be able to build for the football World Cup in 2018. So they wanted to use it for something completely different from the Winter Olympics. That was their choice and that has poisoned the bidding process for a number of other cities, including my home town of Oslo where the population got a backlash going against bidding for the 2022 Winter Games.
Our advice to cities or regions who want to stage Olympic Games is to first of all to get the third agenda right, because that is what you need to sell it to the population, to get a yes vote on a possible referendum. It has to be something more tangible than a velodrome.
What we like to do very early in the process is to make the city or region able to make an informed decision whether to bid or not. To do that they need to cost out all the three agendas. What we usually recommend is to do a number of technical and financial feasibility studies, cost-benefit analyses over 20 to 30 years.
One city we have recently worked with is Amsterdam, who will probably not bid for the 2028 Olympic Games. And way back in 2002-2003 we wrote the original feasibility study that made a business case for London to bid for the Games.

Beyond the Bid – Tokyo and Qatar
We also see our role to be the trusted technical advisor for a host city. We like to work in tandem with the communications agencies, because if you give them a free rein you need a lot of engineers and technical consultants to clean things up in the back room.
We have been working for two and half years on Tokyo 2020 for Tokyo Metropolitan Government; we are currently negotiating for a third year. When we started work on Tokyo, we looked at some of the things that they proposed and advised that they weren’t going to work. The stadium was one of those things, and some of the temporary venues they wanted to put on the island out in the bay.
And we have been working for about five years on the 2022 World Cup in Qatar. From our side it’s going well; we have been working on technical assurance of the stadiums: sitting client-side and advising the design consultants based on FIFA compliance and other criteria.
The thing I am a little bit concerned about is that I don’t think they’d gone far enough on planning what they wanted. I think they sold it on the basis of demountable stadiums, so they basically said we are going to build a number of 40,000 seater stadiums and send 20,000 seats off to Africa. It is feasible, but it hasn’t been designed yet. Somebody calculated that you need 178 containers to dispatch the 20,000 seats. Apart from that, everything is deliverable, no doubt about that.

This article is based on a Host City interview with Erik G Andersen, Special Advisor of Arup’s Host Cities Advisory Service. Andersen has worked on 10 Olympic Games over 25 years