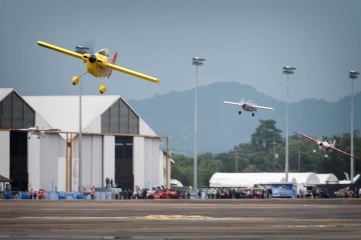 Air Race E plans to run a series of international electric air racing events, starting with the inaugural race in 2020, in an effort to facilitate the development and promotion of cleaner, faster and more technologically-advanced electric engines.

The series will be run by Air Race Events and led by world-leading air racing promoter Jeff Zaltman, the man behind the globally successful Air Race 1 series – the fuel-powered equivalent.

Applications are being received via a formal bidding process  through which a shortlist of cities will be determined by October 2019. A final decision on the selection of the first race venue is expected by December 2019.

“Air Race E is the ideal catalyst for engineering teams to test cutting-edge electric propulsion technology, under the rigours of a proven racing format, while also providing high quality entertainment for international visitors and global TV audiences. We look forward to reviewing the host city bids and working with the successful destination to create a truly historic event,” said Zaltman.

Previous Air Race 1 events run by the company have attracted visitors and media from around the world, reaching an audience of over 1.3 billion people in 127 countries and a reach of more than 4.2 million on social media alone. Zaltman said the potential for Air Race E will be even higher, with support from industry leaders like Airbus, recently announced as the Official Founding Partner of Air Race E, providing industry insight and research to participating teams as they build their electric race aircraft.

Air Race E notes that a suitable airport would be a critical factor in the viability of a city’s bid.

For more information on becoming a host city go to https://airracee.com/content/host-cities/ or email info@airracee.com.

Air Race E will become the world’s first all-electric airplane race when it launches its inaugural series of international races in 2020. Run by Air Race Events and led by world-leading air racing promoter Jeff Zaltman, the man behind the globally successful Air Race 1 World Cup, the race is set to revolutionise air racing and pioneer innovations in electric aviation. Air Race E will see electric airplanes race directly against each other on a tight 5km circuit just 10m above the ground and at speeds faster than any land-based motorsport. The demand for speed, performance and power management under the rigors of a competitive race environment provide the perfect platform for the development and promotion of cleaner, faster and more technologically-advanced electric engines. The Light Aircraft Association (LAA), has committed its support in developing the technical regulations and providing design oversight for the sport, soon to be sanctioned by the Formula Air Racing Association (FARA) and its counter-part in France, the Association des Pilotes D'Avions de Formules (APAF).