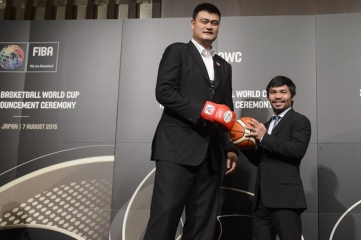 FIBA has awarded the hosting rights to its 2019 World Cup to China, which is set to involve more cities than ever before

The world governing body for basketball announced on its YouTube channel on Friday that China will host the 2019 FIBA World Cup, after the country’s bid leader said basketball could become the world’s most popular sport.

China’s bid was selected ahead of a rival proposal from The Philippines.

Beijing will host all games from the quarter finals to the final, in addition to some group games.

New venues will be built in Foshan and Suzhou to accommodate the tournament.

The decision will enable FIBA to build on a strong presence for the sport in China.

"At least 300 million people play basketball in China and if we host the 2019 FIBA Basketball World Cup, we can increase that participation,” said Zhang Jiandong, Vice Mayor of Beijing and Chairman of the China 2019 bid committee.

Basketball is already the most popular sport in The Philippines, according to Manuel V Pangilinan, President of the Philippines Basketball Association.

Manny Pacquiao, Philippines Congressman and eight-time world boxing champion said "I am a boxer but I am here because I love basketball so that tells you the passion that Filipinos have for basketball. If we host the 2019 FIBA Basketball World Cup, we can show that passion to the world."

Asked to compare enthusiasm for the sport between the two countries, Chinese basketball star Yao Ming said "You can't say that one type of love is better than the other. Both are great. Both countries have a great passion for basketball, particularly for FIBA basketball."

Gao Zhidan, Vice-President of the Chinese Olympic Committee said: "Basketball is very popular in China and if we host the 2019 FIBA Basketball World Cup, we can foresee a great rise in that popularity. This will have a great impact on the professional league (CBA) as well as the university league which is developing very fast. It will help with our aim to train more athletes and get a bigger pool of talented players."