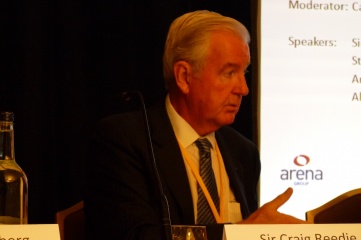 Changes to the IOC’s bidding procedure have attracted a “very considerable field” of five candidate cities, all of which are expected to stay the course until the host city election in September 2017, IOC Vice President Sir Craig Reedie CBE told HOST CITY in an exclusive interview.

“The change in the candidature rules, which came out of the whole reform process called Agenda 2020, seems to have attracted a very considerable field of really good cities,” he said.

“The big addition has been the invitation phase before a National Olympic Committee decides finally to put a city into the candidature role.”

“That’s a complete change from the previous process, where the IOC had a very detailed list of requirements and cities bid against that list.

“So there is a major change there and I understand that it has been welcomed by the cities,” said Sir Craig Reedie, who is delivering a keynote speech at HOST CITY 2015, which takes place in Glasgow on 9th and 10th November under the theme of “Creative Innovation Connecting Cities with Sports, Business and Culture Events.”

The five bidding cities – Budapest, Hamburg, Los Angeles, Paris and Rome – have all progressed to the candidature phase, rather than going through the previous applicant city phase, and will now submit their candidature files in three sections.

“So rather than one huge bid book being required at a set date, it’s divided into three sections. There are workshops planned; there are assistances planned to the cities throughout.”

In the previous round of bids for the 2022 Winter Olympic Games, three cities pulled out of bidding during the applicant phase while Olso withdrew in the candidature phase.

The IOC’s new and more consultative adopted now means that such a fallout is unlikely to happen, Sir Craig Reedie said.

“It is not beyond the bounds of possibility that a city could come back and say we’re not taking it any further – I think that’s unlikely in the sense that a lot of work will have gone into this, a lot of discussions have gone on through the invitation phase. And since it’s going on through a stage by stage basis I think it’s highly unlikely that people will withdraw.

“The end result of that is that we will have five cities presenting to the Session on the ultimate decision to be taken in Lima in Peru in 2017.”

Asked if it was a relief when Los Angeles stepped forward to take the place of Boston’s abandoned bid, Sir Craig Reedie said: “Yes, I think the USOC have all but admitted that their process might not have worked in the selection of Boston.

“But, with Boston’s withdrawal, they were fortunate in many ways that the Los Angeles people were so able to come to the party very quickly and in a relatively tight timeframe.

“Los Angeles has an Olympic record – if they win they will be like London, hosting the third time. The city has changed dramatically over the last few years and I am sure they will come forward with a very good bid.”

The IOC is very pleased to have five cities bidding, Reedie said. “It’s an interesting mix. Paris is looking to celebrate the 100th anniversary of the 1924 Games in Paris and has clear bidding experience.

“Rome hosted outstanding Games in 1960 and there seems to be considerable enthusiasm in Italy and in Rome behind the Rome bid, so they are impressive.

“Budapest has come quite late to the party but again a splendid city and Hungary has a terrific Olympic record.

“It’s interesting that when the German Olympic Committee decided to choose Hamburg as opposed to Berlin, who I suppose before that decision would have been seen to be favourite, immediately there was strong support from Berlin for the Hamburg choice. So again there seems to be a great deal of unity there.

“So it’s a really good field.”