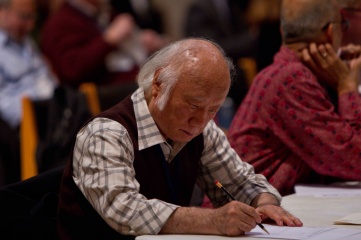 The World Choir Games 2022 are being held in Gangneung, Korea. Prof. Hak-Won Yoon, one of the grand masters of Korean choir music, is working hard to host a successful event.

Further, he is known and highly appreciated internationally for his efforts to introduce Korean choir music to the world. New original compositions, but also "Korean Style" arrangements, were always a hallmark of his work.

High expectations for the World Choir Games 2022 in Korea

In 2022 the 12th World Choir Games – the largest international choir competition in the world held every two years on different continents – will take place in Yoon’s home country again: the city of Gangneung in the Gangwon Province will welcome amateur choristers from all around the world on July 4-14, 2022. In an interview with the Korean edition of “Choir & Organ” magazine published in the edition of July 2021, the maestro recently expressed his expectation for the Games and the meaning of holding the event in Korea for the second time after 20 years:

"The World Choir Games, a representative choral event hosted by INTERKULTUR, is a festival full of fun and with a high level of perfection, so that once you participate, you will fall in love with its charm and want to continue participating. In addition, the fair evaluation system established by INTERKULTUR for the contest, which accumulate into the foundation for fair competition along with the know-how accumulated over their 30-year history are also great advantages.

“The anticipation for the 12th World Choir Game to be held in Gangneung in 2022, 20 years after it was held in Busan, is very high. As a choir person, having the World Choir Games in Korea again is very meaningful and I have high expectations. I hope that this event will be an opportunity for another choral boom in Korea. The World Choir Games have enough elements to entertain the public. It's not just a stage event, it's a large-scale choral festival including a huge street parade in folk costumes. I hope that these merits will become widely known, and many choirs will participate and look forward to participating in the world-class choral festival in Gangneung for ten days.”

Honoring his work for the international choral world and his commitment to INTERKULTUR events, Prof. Hak-Won Yoon was even appointed Honorary Artistic President of INTERKULTUR, the World Choir Games and the World Choir Council in 2020. Until today Yoon supports and promotes the idea of INTERKULTUR and their mission of bringing people together through music. Events like the World Choir Games are important to promote choral singing as a whole – including all its artistic, entertaining, social and healthy aspects, which Yoon also summarizes in his most recent interview with Choir & Organ:

“Chorus is the basis of music. Chorus is something you do with someone other than yourself. If you want to be together, you naturally develop social skills because you think about other people and consider whether the balance is right. The best activity to develop character is choral singing.”

The World Choir Games go around the world, every two years in different cities on different continents, with the aim to spreading its message of peace and mutual understanding through choral singing to every choir and every singer in the world.

If you’re interested in hosting the event in your own city, please visit worldofchoirs.com