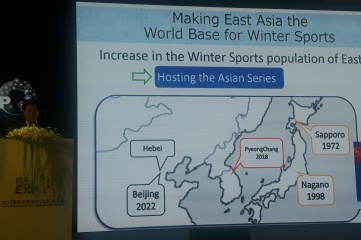 “In China, the popularity of ice and snow activities needs to be improved.

“So I really hope everyone can pay special attention to our 2022 Olympic Games but meanwhile focus on the ice and snow activities among the citizens to further spread the Olympic spirit.

“Tourism, sports, culture and health are regarded as the industries of happiness.”

“Helsinki is sister city of Beijing and recently an action plan was signed between the two cities, extending the bond between the cities to include winter sports.

“We were very honoured to have President Xi visit Finland and meet our President in April 2017. The two Presidents made the joint declaration where both sides can cooperate in several areas. I was extremely happy that both presidents promoted the exchange in winter sports and cooperation in the organisation of the Olympic Games.

“This gives a very good basis to share also the urban city development between Beijing and Helsinki to support Beijing Winter Olympics 2022. We know that you will have a great Games in China in Beijing, but we are very happy of the friendship that Helsinki and Beijing has built over the years.

“Finland is world renowned for education. clean tech and winter sport. Finland ranks first in quality of primary education and has some of the cleanest air in the world. Education and clean technology are very important when discussing winter sports.

“Most Finns learn skiing, ice hockey, skating and other forms of winter sports in their childhood.

“I moved to Finland when I was eight years old. My first touch with winter was holding snow in my hand. When holding the snow, I asked my parents why does this feel like holding diamonds in my hand? It felt so pure and so unique.

“There are also special programmes like Schools on the Move which encourage students to have more physical activity during school and support learning during activity based methods.”

“We take pride in our Olympic history; it’s a strong spirit in Norway. We are the country that has the most number of gold medals in [winter] Olympic history.

“Building a winter sports culture takes devotion, it takes time. It requires a broad-based perspective; you need to focus on the top elite athletes but you also need the base and grass roots level. The Norwegian sports model is based on a very strong volunteer culture; it’s focussed on education and sport in schools.

“It also reflects the connection we have with the outdoors, and particularly with snow and ice. Norway tops the happiness index – we are top of that happiness interest. We are able to make use of the outdoors all year, and have the equipment and infrastructure to experience outdoor living.”

“One thing that was very important was that we had snow every winter. In addition, we had the technology to produce snow and the knowledge of how to store it from one season to the next.

“Another crucial thing is the narratives that they bring from one generation to the next: we are skiers.

“Lillehammer’s coat of arms consists of a skier and alongside this beautiful picture of a skier is a courageous story of skiers saving our future king in 1206. Narratives like this create identity and fosters ski culture. The saying goes like this: we are born with skis attached to our feet.

“The nature surrounding our history of skiing is the foundation of Lillehammer’s identity as a winter destination.”

“It’s not enough to have the technology, it’s also important to get the people in there, especially children and families.

“The Vienna Ice Rink has 600,000 visitors per year. All children in Vienna from first grade in school or final year of kindergarten are invited one day to go free of charge to go skating. They then come back at the weekend with the whole family. So out of one child we have made four to five people experience ice skating and curling.

“Even at larger schools, it is very common to have an ice rink there.

“In Europe we have a tradition of sports clubs, where in every city there will be ski clubs and skate clubs who have programmes for children and also top athletes and retired people.”

“We were the first Olympic Games held in Asia in 1972. The Games aimed to make Sapporo into an international city. It is precisely because of the Games that we created the city.

“We developed a subway line that went from the city centre to the athletes’ village and the stadium, and the runway was extended to turn the airport into an international airport.

“There have been a lot of changes in terms of our environment as well. Until the 1960 the snow was black with pollution. However due to the Olympic Games we began to aim for a city free of pollution.”

“There is no other experience that feels so great as gliding on snow. It’s like flying without wings.”

“Winter sports more than just a passion – it’s a lifestyle and culture that sits within everyone. We want to develop this culture beyond competitive sport, into the heart and soul of the people of China and here in Beijing.”

“The prefecture of Nagano is in the centre of Japan and close to the three major cities – Tokyo, Osaka and Nagoya.

“With a population about 2.1m, Nagano has the longest life expectancy for men and women in Japan and the world. For those wishing to live a long a happy retirement, by all means come to Nagano – you are welcome.

“Some aspects of the legacy of the Games can be presented in financial terms. From an economical perspective, the infrastructure developments were of great benefit for Nagano. The bullet train, which opened in October 1997, shortly before the Nagano Olympics began, cut journey times from 180 minutes to as little as 80 minutes. The upgrade of the highway network progressed quickly and it is now accessible to almost all areas of Nagano within just 30 minutes

“Regarding the economic effect of the Nagano Olympics, 1.43 trillion yen was the cost of the freight train and highway network and event facilities came from public investment. This equates to roughly 10 times the prefecture’s annual public investment budget.

“But the benefits cannot all be expressed in financial terms. Our visibility has risen. Local pride and appreciation have increased and through the actions of the 32,000 volunteers present at the Olympics are volunteer culture has taken root.

“Hosting the Winter Olympic Games rapidly increased the number of people participating in winter sports in north east Asia and also developed businesses in this industry.

“The number of people participating in snow sports in Nagano reached its peak in 1998 during the Olympics at 18 million people and sharply dropped over the following years to just 40 per cent of that figure in 2013, decreasing to 7.7 million. However, in recent years this decrease has stopped and, thanks to an increase in the number of international visitors, it has begun to show signs of recovery.

“I would suggest that Beijing, Hebei prefecture, PyeongChang, Sapporo and Nagano join together to host a new international tournament – the Asian Series of Skiing and Skating.”

“At the IOC Sport Department, we have a very good tradition of receiving others who come to talk about their experience of the Olympic Games, on and off the field of play. They talk to us about their participation in the Games and shared with us their magical moments.

“Early this year we have the honour to receive Olympic medallists from China and world legends gymnast Li Ning and Chen Yongyan. Li Ning talked to us about the pride of being chosen to carry the torch during the opening ceremony of the Olympic Games in 2008. We watched a video of his performance and we all felt his emotions and excitement at this unforgettable moment. And we of course felt a pinch of insight to think what surprises the Opening Ceremony 2022 will bring to us.

“In June this year, Beijing’s commitment to support athletes was further underlined when it hosted the 8th athletes career programme forum with over 85 participants from more than 30 countries. The event was held successfully and our links with Chinese Olympic Committee got stronger.

“Beijing is also a truly unique Olympic city. In just four and half years it will become the first city to have hosted both summer and winter Olympic Games. This is very much supported by your incredible vision for 300 million people to be practicing winter sports in China. I personally find it incredible; these are amazing plans.”

This article, based on comments made at World Winter Sports Expo (WWSE) 2017 in Beijing,  first appeared in the Winter issue of Host City magazine.