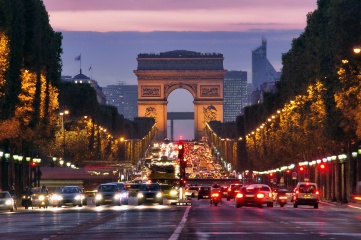 Cities in the future will be able to better predict congestion rather than simply react to it, thanks to research from the European Research Council

It represents perfect recipe for a traffic jam: bring thousands of cars with tens of thousands of spectators converge on a single site at a specific time. This is what happens during major sports events.
Pure science offers a way to ease the pain. Research funded by the European Research Council will underpin next-generation traffic management systems that anticipate traffic jams, rather than reacting to them
No matter how real-time the data feeding into them, existing traffic management systems are essentially reactive, switching traffic lights, opening motorway hard shoulders, or setting up diversions, after the event.
For ERC grantee Ludovic Leclercq, of the French Institute of Science and Technology for Transport, Planning and Networks (IFSTAR) and professor at the University of Lyon, this is the wrong way to look at the problem. Rather than amass and analyse the huge volumes of data that flow in as a city’s streets become congested, the transport management systems for smart cities of the future should focus on the underlying causes of congestion.
Existing technologies rely too much on a never-ending process of collecting data from cars and road sensors. For example, IBM and Volkswagen are working together to build what they call an ‘Internet of cars’ in which sensors in vehicles generate geospatial data that indicates traffic density and patterns in real time. IBM has also worked with the city of Eindhoven to implement a system that collects data on braking, acceleration and location from sensors placed in cars and on the road.
Meanwhile, Amsterdam has a congestion management system called TrafficLink, which monitors the national road network to help reduce congestion in the capital. The city plans to expand the system and to connect it to satellite navigation systems inside cars as they drive into the Dutch capital and its metro area.
Such traffic management systems may be getting smarter, but they continue to rely on collecting and analysing massive amounts of data, which is then passed onto traffic managers, who then attempt to inform driver behaviour after the event.
Collecting so much data is both “difficult and poses ethical questions,” says Leclercq. Traffic managers use it to assess traffic flow, and to identify and remove bottlenecks from the system.  But notes Leclercq, this does provide any insight into what caused the congestion in the first place.
He hypothesises that knowing more about how people choose departure times and routes would make traffic management systems much more effective.
At the heart of his ERC project, MAGNUM (Multiscale and Multimodal Modelling Approach for Green Urban Traffic Management) is the creation of a citizen science simulation game, which will be made available in the first half of 2016. Volunteer users will be able to sign up and input their preferences for traffic routes. Leclerq will combine this information with existing traffic data to determine which journeys cause the most congestion in a system.
Users will also be asked what kinds of incentives would lead them to alter their departure times or routes, or to choose to travel by public transport rather than by car. Factoring driver behaviour (demand) into road network capacity (supply) models, will provide the inputs for efficient and green traffic management.
Based on the information, traffic management systems will become truly smart and traffic managers will be able to adjust their strategy and switch, “from user equilibrium to system equilibrium,” Leclercq says.