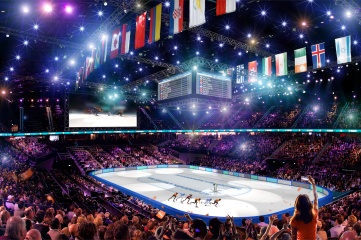 How do you bring sport out of the stadium and into the city? Rotterdam Topsport explains

Over the course of last year, over 1.5 million people visited the forty different elite sports events happening in the city. These numbers say a lot about the attractive force sports have in Rotterdam, a sports city with ambition. This has not gone unnoticed: Rotterdam is ranked eleventh in the world ranking for sports cities.

A pier in the middle of the Port of Rotterdam was once the location of a prestigious Davis Cup tennis court; and on the gangways in front of the monumental SS Rotterdam cruise ship rose a beach volleyball stadium. Both were unexpected spots to experience sports, but the locations were enthusiastically received by both athletes and visitors alike.

Out of the stadium and into the city has been Rotterdam’s philosophy for years. This tradition of placing the sports arenas in the city centre and involving the public with the event has been wildly successful in the city on the banks of the Meuse. These events come with great practical challenges, but those challenges are faced head-on in Rotterdam.

Take the Rotterdam Marathon for example: the center is locked-down for an entire day, but every single person in the city sees it not as a disruption, but as cause for celebration. On such days every resident is inspired by sports.

It should be clear: Rotterdam and sports go hand in hand.  This is a city where three clubs play in the Dutch premier league: Feyenoord, Sparta, and Excelsior. A city with three football stadiums, a hockey stadium, an internationally acclaimed rowing course, a baseball stadium and a large indoor events arena (Ahoy Rotterdam), Rotterdam offers elite athletes a world-class stage.

Every year the city aims to attract one or two European or World Championships, but for the following two years we have already added a third to the agenda. Next year Rotterdam is the backdrop for the World Short Track Championships in Ahoy, EURO2017 for Women in Sparta Stadium, and the World Triathlon Grand Final. Rotterdam is exceptionally happy with such a packed agenda, with events that yield benefits for both the city and its residents.

These positive benefits resonate through the results of the impact research done after each major event. Who visited? How much was spent? The city uses these results to learn, grow, and become better with each event.

Engaging events do not stand alone. In the months leading up to the “main event” the city gets a taste of what is to come through various side-events. This way, everyone is abuzz when the next event hits the city. Posters, flags, even massive billboards brighten up the streets and bring attention to the event: city dressing is key.

Elite sports inspire the city to get up and be active. With different activities in each neighborhood the local residents are inspired to exercise. Recreational sports teams flourish, as do the professional ones; special attention is paid to young talents with great potential.

Rotterdam is a very young city, and the sports on offer highlight that. Next to more conventional sports such as football, basketball and hockey, increasing attention is being paid to urban sports like skateboarding and BMX. These spectacular sports can always count on much attention from the public. Behind the scenes the city is already planning for urban sport’s inevitable rise.