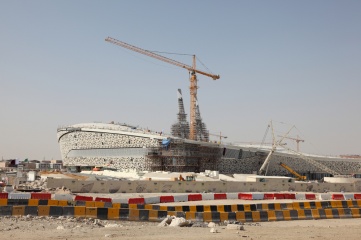 The Qatari government is set to sign up to $50bn in infrastructure contracts over the course of 2014, according to Sheikh Abdullah bin Saud al-Thani. This represents a massive escalation in construction activity as the 2022 FIFA World Cup draws nearer.

The contracts will include transport and energy projects. A tender for phase one of the Doha Metro has already been issued, according to unnamed sources speaking to Reuters, with a contract expected to be signed by the end of August.

The $50bn figure, announced by Sheikh Al-Thani at the Qatar Projects 2014 show organised by Meed Events, significantly exceeds previous estimates. Speaking a month before the event, Edmund O’ Sullivan, the chairman of Meed Events said contract awards for big infrastructure projects in Qatar in 2014 were “likely to hit $24bn”.

The recent upturn in spending follows a slow start to the world’s biggest infrastructure project.

"Even with Qatar's means and ambitions, the resources of time, space and human capital are not endless, especially when concentrated on a mere 10 per cent of its soil,” Tilman Engel, managing director of Sport Business Consulting International told HOST CITY.

Engel advised and directed the Qatar professional football league from 2007 to 2009, during their process of reorganisation and professionalisation in line with AFC and FIFA directives. “Given the enormity of both the World Cup and the National Vision 2030, it is no day too soon for Qatar to launch the projects key to make both visions work."

Infrastructure projects in Qatar accelerated over the course of 2013, overtaking the UAE midway through the year with $12.2bn of contracts awarded, said O’Sullivan. “The bulk… came from the multi-billion-dollar tunnelling packages awarded as part of the Doha metro project.”

On winning the host city election for the 2022 World Cup in 2010, Qatar stated that it would spend $140bn on civic and sporting infrastructure. This figure was soon upgraded, with a report by Deloitte in September 2013 stating that Qatar plans to spend $140bn over the next five years on transport alone.

$200bn is due to be spent over the next 10 years on construction. A further $20bn is to be spent on tourism infrastructure to prepare for the influx of football fans, the Deloitte report said. Since then, an investment of $45bn into tourism by 2030 has been announced.