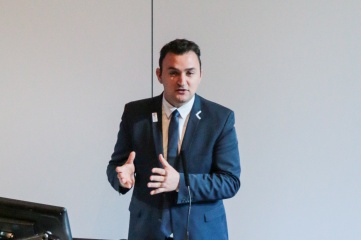 Jean-Francois Martins will be speaking on legacy planning for Paris 2024 at Host City 2018 in Glasgow on 20-21 November (Photo: Host City)

Jean-François Martins, deputy mayor of Paris, talked to Host City about the cooperation agreement between the French capital and London as preparations ramp up for the 2024 Olympic Games

With the IOC’s coordination commission for Paris giving a ringing endorsement to the city’s Olympic project on their first inspection visit in June, organisers are maximising efforts to use the Games as a platform for major developments at the city, regional and national levels.

Amid reports of rising costs, IOC inspectors’ concerns were alleviated by a joint financing deal between Paris 2024, the city and French government guaranteeing €1.4 billion ($1.63bn) of funding for Olympic-related infrastructure. The agreement provides more certainty for two of the most controversial projects, channelling extra money to build a permanent aquatics centre with a redefined legacy concept and enhancing value for local residents around the Olympic Village site.

The post-Games plan for the aquatics venue will see the region of Seine-Saint-Denis receive nine swimming pools after the Games rather than the five initially planned, to plug a shortage of community sports facilities in the area. While the Olympic Village remains in its originally planned location, residents living nearby will benefit from the undergrounding of power lines, new housing and the creation of new green spaces.

Jean-François Martins, deputy mayor of Paris, says the city and Games officials are delivering on their ambitions thanks to the help of an agreement between the mayors of London and Paris.

“After Brexit [vote in 2016] Mayor Anne Hidalgo and Mayor Sadiq Khan decided not to be competitors but to have really strong relations between London and Paris and to create together, at the heart of Europe, cities that will shine on a worldwide scale,” he told Host City at SportAccord.

“So they decided to work together especially with the Olympics where the learnings, skills and experience of London will be precious for us and maybe as well we can share what we can do 12 years after London and to inspire each other.”

In addition to collaborating to combat societal issues, Hidalgo and Khan are undertaking huge efforts to tackle the global climate crisis. “Both of them are really committed in the fight against climate change… so we are putting the Olympics at the heart of the Paris agreement on climate change which will help us deliver an environmentally-friendly Games,” Martins added.

The two mayors are scheduling a conference in 2019 to discuss climate issues. “I am pretty optimistic about this cooperation,” he said.

Hidalgo is also chair of C40 Cities, which connects 96 cities to take climate action, and represents 700-plus million citizens and one quarter of the global economy. Organisers of the next four Olympics – in Tokyo, Beijing, Paris and Los Angeles – are supporting a new IOC partnership on climate issues inked with the C40 group at the end of June. They are working with interested cities, candidate cities and Olympic hosts to help them reach their sustainability goals.

C40 chair Hidalgo, who also heads Olympic delivery partner SOLIDEO, emphasised that hosting the Olympics “is a unique privilege for any city, and provides an amazing opportunity to accelerate the climate and air quality initiatives that mayors need to implement for the future of their citizens.”

It’s so far, so good for Paris 2024. The IOC coordination commission chair Pierre-Olivier Beckers-Vieujant was gushing with praise after the inspection visit.

“Paris 2024 is delivering on its commitment to host pioneering Olympic Games fully in line with Agenda 2020, the IOC’s strategic roadmap,” he said.

“I have been particularly impressed by the ambition of all of the stakeholders involved in this project to take advantage of the opportunity of the Games to create a springboard for the city, region and nation.”

This article first appeared in the Summer 2018 issue of Host City magazine. Jean-Francois Martins will be speaking on legacy planning for Paris 2024 at Host City 2018 in Glasgow on 20-21 November