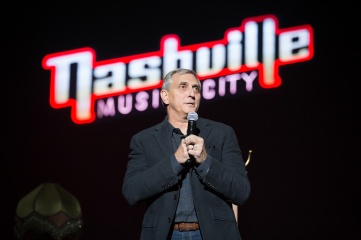 How did Nashville turn its fortunes to attract millions of spectators from far and wide? Host City talks to Butch Spyridon, President and CEO of Nashville Convention & Visitors Corp, the man who made it happen

Host City: What sort of a situation was Nashville in when you took over?

Butch Spyridon: Our primary attraction was a theme park. The company that owned the theme park owned two TV networks, so, we had the ability to package the city and put it out on the networks, and we relied on that for weekend visitors in summer and spring.

The theme park closed in 1998, and the networks went away. Then 9/11 hit a few years afterwards, and we were sitting here with no substitute demand generator. Our city convention center was woefully inadequate and we were just floating in the water. Even our primary source of business, the Opryland Hotel, was starting to build hotels around the country, so it was no longer a case of signing five-year contracts to come to Nashville; it was signing five-year contracts to rotate along with three, four and five other cities.

So we had to decide: do we want to be in the business of the hospitality industry, and, if so, what is it going to take to be successful?

I don’t think any other city has used events quite like Nashville as a key strategy to getting itself out of its slump – to create awareness, recognition, build the brand, generate PR and sell hotel rooms. It’s very intentional, and in 2003-2004 we put a plan together.

Three things came out of the planning process. We needed a true demand generator – a new convention center, that became the Music City Center.

Then it was to own the Music City brand. We had a nickname, but we didn’t have a brand. And we focussed on living up to the brand in every way imaginable.

And then the third leg of the stool was to use events to build the brand, to draw attention to ourselves and generate travel.

So, the cornerstones were the convention center, the brand, and big events.

Host City: What big events did you host in those days?

Butch Spyridon: First, we worked with CMA, the Country Music Association, to stage a four-day, 45,000 out of town visitors per day event. At the time it was 20,000 and dying, a very uninspiring event. We worked with them to reinvent it and move it downtown. That was the number one move, to grow that as a signature summer event.

Then we took over July 4th and turned that into an event that sells 20-25,000 rooms and generates national PR for us.

Host City: How did Nashville manage to take ownership of something which is a national event?

Butch Spyridon: We had to make it bigger; we had to bring A-list talent to the table. And for events that go on in other places, we look at who does it best. When you think of July 4th or New Years’ Eve, where do you think of? It’s New York. We don’t have the Statue of Liberty, but we could put on the biggest fireworks show in the country. Nobody would expect that from Nashville.

We built the reputation with A-list talent like Lady Antebellum and a symphony performed live with the fireworks choregraphed and hand fired – which nobody else was doing. We made it the biggest July 4th fireworks show, we made sure the music was in place and we only book Nashville-based artists. We’re happy to go head to head with Macy’s or Philadelphia or Boston – our “Let Freedom Sing” show is that good.

It worked so well that the hotel community asked us to build a New Year’s Eve event. So now we are entering year nine for New Year’s Eve – 100,000 people, 20,000 hotel rooms – we built it from the ground up. For New York, New Year’s Eve is an event, but ours is a party! There’s a subtle difference there.

Host City: Nashville is renowned for music, but how has Nashville taken steps to host major sports events?

Butch Spyridon: We booked the 2014 Final Four NCAA Women’s Basketball Tournament, that was a big step six years ago. Then we saw what we could really do.

We booked and hosted the Sports Illustrated Swimsuit Issue launch in 2015. We really brought it to life with a downtown festival with the Kings Of Leon headlining. We tented Lower Broadway, an eight-lane wide street with honkytonk bars and neon lights, and streamed it live. According to Sports Illustrated, it was their biggest and most successful launch. It was food, music and fashion in Nashville.

Two years ago we hosted the NHL All Star game and really turned that into an event instead of just a sporting competition in the arena – we brought it outside, we had a concert, we had celebrity guests – we elevated the All Star game in a way the NHL hadn’t done before. And now they’ve tried to continue that.

We also chased for the World Cup with the US when we lost six years ago. And this year we were part of the successful United bid, and that’s taking our domestic US national event strategy and pushing it globally.

Host City: Do you think this will be the seminal moment where you become a truly international event host?

Butch Spyridon: I think we have a decent shot; it’s not a foregone conclusion. If you think about it, ten or 11 US cities will host games. There will be training sites and a media center, and there will be a conference in February before the year of the Cup. So there are ample opportunities to score something – we obviously hope it is a game.

We know we are on display, so next summer we’ll have another Gold Cup game – it will be even more meaningful next year. When we do events, we do them at a high level. It is Nashville’s time to shine. It’s important we have a good turnout as the decision-makers will be watching not only how we execute but also how the fans respond to coming to Nashville for a soccer game.

Prior to the Gold Cup we will host the 2019 NFL Draft, which is a pretty big coup for us. Over three days, several hundred thousand people go through; it’s broadcast on multiple TV networks with international media – and we want to turn it into an international party.

The Tennessee Titans are playing in London this summer, so this further enhances our exposure and our ability to market both the football season and the draft itself.

Host City: Are you interested in other international sports championships?

Butch Spyridon: Where we have the facility, the answer is absolutely, yes. We can build a case for rugby, for International Champions Cup (ICC), when private promoters bring European teams over her. We hosted an ICC Game last year with Manchester City and Tottenham Hotspur; we are told we will get one next year. Those sorts of things are very important.

One of the most fun events we host is Red Bull Flutag. The concept is they build a runway over water to see who can fly the furthest with homemade flying machines.

Do you see yourself as in competition with other cities or is it useful to get together to share ideas?

Butch Spyridon: I absolutely believe and love learning from what other cities, destinations, countries have done. We can all learn so much from each other, I do believe that, but also believe it is competitive, and we try not to give away all the secrets.

Host City: So how useful would an event like Host City be to you?

Butch Spyridon: Very useful. There are sporting related conferences like that that but there is not an event conference especially that includes international. I think it would be extremely valuable.