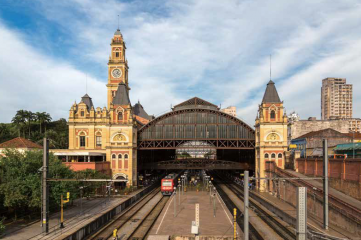 Brazil is upgrading its infrastructure for 2014

César Borges, Brazil’s Minister of Transport, talks HOST CITY through the road, rail and airport projects that are bringing his country into the 21st century

As the fifth biggest country in the world by both area and population, transport is a huge issue for Brazil. Developments in transport infrastructure have lagged behind the recent acceleration of the country’s economy, but the government is now investing heavily in building networks that will enable economic growth to continue unhindered.

“Brazil, due to its continental dimensions with its 8.5m sq km in area, needs to integrate its several regions and therefore afford mobility to its population,” says César Borges, Brazil’s Minister of Transport. “This is why we are gathering together public and private resources in partnerships to make sure that we allow better logistics throughout our different transportation modalities, including roads, railways, and waterways, in order to meet the demand that we have and to reduce logistics complexities and costs, and therefore add competiveness to our industries.”

In the air
The World Cup in 2014 will feature 12 host cities that straddle this vast expanse of land. Due to the large distances between host cities, large numbers of fans will have to travel by air between games. This is where Brazil faces some of its biggest challenges.

“We are increasing the number of flights available. We are reinforcing the capacity of Brazilian airlines to offer more seats during the World Cup. And we are ensuring that airports are ready to meet this increased demand during the Games, particularly those in the host cities, to receive passengers quickly to allow for expedited check-in and check-out for all passengers,” says Borges.

Brazil is in the process of renovating its airports. “There are currently five airports under concession being modernized, including the Galeão Airport in Rio, which I expect to be completed or near completion by 2016.”

All the other airports are being renovated, expanded, managed, or improved by Infraero, the Brazilian Airport Infrastructure Company, instead of being awarded under concession. “Infraero will open its capital to attract operators from all over the world that can come and bring expertise to Infraero, improving the operation of the airports that Infraero currently works on – either recovering, expanding, or managing their operations.”

On the road
Journeys between some of the host cities will be possible by road. It is only 184 miles from Natal to Recife, for instance. From Rio de Janeiro, it is 266 miles to São Paulo and 269 miles to Belo Horizonte.

“Brazil already has a very extensive highway network with more than 55,000 km of paved highways in extension. These roads, under the federal government’s responsibility, are in a very good state,” says Borges.

Duplication – the creation of dual carriageways – is an important area of development. “We have recently awarded about 5,520 km of highway under concession schemes and approximately 5,000 km of highway have already been duplicated. Therefore, mobility through Brazilian highways has its safety and expediency guaranteed during the World Cup.

“There are 2,500 km of road duplications planned for the near future and we also need new roads in new areas of the country, particularly in the Midwest and the North. We are identifying new highway passages or highway stretches that are attractive for investment, both due to their vehicle movement, to the cargo movement, or to the passenger movement.”

Railroad revolution
Today, rail transport in Brazil is virtually non-existent, with just a few routes available. This is all about to change. “We want to have a new, a completely new railroad network for the country that is 11,000 km long, which unless I’m mistaken is something unforeseen in the world,” says Borges.

The Superior Court of Audits (TCU) is currently evaluating contracts for two major stretches of railway. One is for the Açailândia-Barcarena passage, which would complete a major route called the North-South Railroad. “It will connect the port of Rio Grande in the very deep south of Brazil to the city of Barcarena in the mouth of the Amazon River up in the north – approximately 7,000 km of railroad – which will become a very large spinal cord of a railroad system.”

The North-South Railroad will intersect with an East-West Railroad. This network will be open access, which means that several operators will be able to use it. “The federal government has taken measures to show that the open access model is the one that will best serve this new infrastructure being built with these largegauge railroads, which will run at 80 km per hour and are very efficient.”

The primary motivation for the rail network is to enable the transport of materials and commodities. Passenger services are not planned on these routes.

High speed rail delays
A high speed rail (HSR) link between Rio de Janeiro and São Paulo was originally planned to be operational in time for the 2014 World Cup. However, the tendering process has not gone according to plan and the line is unlikely to be in service before even the Olympic Games in 2016.

“We need to build a model that attracts the most bidders possible who want to invest in the sector,” says Borges. “The model we considered this year and proposed for market evaluation only attracted one company, Alstom. And since this one company was under queries or investigations by the Government of Sao Paulo, the federal government decided to refine the model to make sure that it was more attractive to more bidders.

“The obstacles here for attraction of companies particularly include demonstrating that we have cargo movement and passenger movement demands that are sufficient for a high-speed rail system. We need to demonstrate that we have very high levels of cargo in Campinas, Sao Paulo, and Rio de Janeiro, which are the main city centres or urban centres to be served by the high-speed rail system. These centres have very strong passenger flows and it is certain that only a high-speed rail can prevent the need for building of new airports and new roads to serve these city areas in the future.

“This is why the Ministry of Transports is working hard to implement a high-speed rail system. And we expect by the end of 2014, after the elections, or by 2015, to begin having our HSR or high-speed rail auctions.

“We need the high-speed rail model and the federal government believes in implementing the high-speed rail model. It is of course complex and subject to debate, but it is a model that pays for itself due to the passenger demand that it creates. And I am sure that we can implement it. It is a necessary stage in the country’s development path, which we will pursue staunchly."

Rio 2016
Host City asked Borges about whether the success of London 2012 is influencing Rio de Janeiro’s plans for transport networks during the Olympic Games. “As a Minister working closely with the federal government, I can say that I believe Brazil is doing everything to make sure that we make good use of all successful experiences from all Olympic Games organizers throughout the world, including London, which had a very well organized and successful Olympics, to help organize ours,” he said.

“We have some structural issues, but the city of Rio de Janeiro and the federal government have been working together to ensure that all sectors involved can be correctly contemplated in the organization of the Olympics, and transportation is certainly one of the sectors that deserves the most attention amongst those.”

“Rio is also doing renovation work to its urban mobility network in general, and to its road network, to allow all of those visiting the Olympic Games to be able to move to and fro appropriately and adequately.”

Public finance, overseas capital
Brazil’s transport plans are being realised through a combination of public and private finance. With road and rail plans are all scheduled to be executed within five years, a period of intense investment is underway.

“The Ministry of Transports is investing about 15 billion reais per year, and that number is growing through the growth exploration programme, or the PAC, as it is called in Portuguese.”

This programme started in 2007. “Since then, very strong investments have been made in the area and in budget terms, they were decoupled from government expenses – which means that these investments do not influence the country’s primary surplus. We were able to spend and are able to spend on our infrastructure without affecting other areas of the government.”

The participation of global businesses will be crucial in delivering these projects. “We would like to have participation from international capital in this process. We want to have companies come in who want to join the country and be partners of the federal government, and of the private initiative, including through joint ventures and special representatives. We are planning investments of above 250 billion reais and we want the international private sector as well – logistics operators, large construction companies, and others to come and work here.

“We want to make sure that what matters most is that Brazilian logistics can overcome this large period we have had in the past, during which our infrastructure system was neglected and stayed in the last century. We want to bring true 21st century logistics infrastructure to Brazil.”