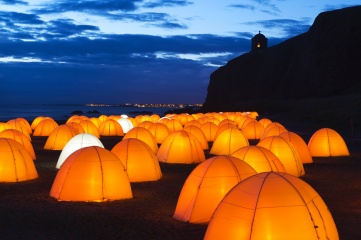 Peace Camp was installed in nine coastal locations during London 2012

Helen Marriage, director of artistic events company Artichoke and speaker at HOST CITY Bid to Win, talks about the role of art in major events and civic spaces

HOST CITY: Does culture have a prominent enough role within the Olympic Games now?

Helen Marriage: I think it’s great that there should be a cultural aspect to the Olympic Games, but competitive art is not how the world is these days. There’s a sense in which art does different things from sport, and that whole thing about winners and losers isn’t really how most artists would think.

What you’re dealing with in terms of the Olympics is a very big machine, which is very dedicated to the concept of winning and losing. I think a rebalancing of the significance of art and sport would be really interesting, though whether that can be achieved easily I have some doubt.

The thing about art that differentiates it from sport is the uncertainty. If you are running a sport event, you don’t know who’s going to win but you know what the format is – there are rules and regulations.

I think that London went as far as it is possible to have gone currently in terms of getting culture to be taken seriously as part of the Olympic effort.

HOST CITY: What was the cultural highlight of the Olympic Games for you?

Helen Marriage: I would of course say the project that we did for London 2012, by the director Deborah Warner and actor Fiona Shaw called Peace Camp. It was described by the New York Times as a “refugee camp from heaven” epitomising the story of the Olympics. It was a series of nine installations around the coast of the UK that welcomed visitors through the great poetry of our land. It was a beautiful, quiet, contemplative piece that showcased Britain as an island nation and it was really lovely.

There were really lovely things in London like Piccadilly Circus Circus, which was the opposite, with thousands of people and lots of energy. But the thing I loved about what we did was that it was the opposite of competition – it was really far away from London and you had to make an effort to get there.

HOST CITY: What’s your opinion of public art projects like the Arcelor-Mittal Orbit?

Helen Marriage: I completely understand the motivation for doing it, to build something that was there during the Games and would be there for legacy. It’s not necessarily to everyone’s taste, but those monumental sculptures are always interesting and provoking debate is part of the function of art anyway.

The thing about art is that it’s non-competitive – it’s about how an extraordinary, surprising, magical, unlikely idea can be conjured out of nothing.

Money spent is money spent, but all these things – sport, art, music and religion are all manifestations of our culture and it’s always great to do so as a public voice.

HOST CITY: What are the benefits of artistic events and installations for the people that live in cities?

Helen Marriage: There’s always the thing about looking at your city differently; and they can attract inward investment.

If you look at something like poppies at the Tower of London for Remembrance Day that’s an artwork; it started very quietly. It’s a really simple idea, it’s made millions of pounds for charity, five million people have been to see it, it’s created a real buzz and sense of destination, it was moving to people. Whether you think it is great art or not is not the point – it’s that it captures public imagination.