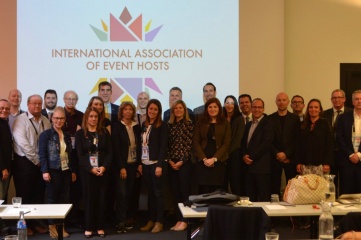 The International Association of Event Hosts (IAEH) came together from across the globe for the annual IAEH Forum at SportAccord Convention in Aarhus, Denmark yesterday to discuss and vote on the structure of the organisation.

Representatives from 24 of the 34 member organisations voted on the incorporation of the IAEH as a charity under English law, overseen by the Charities Commission in England. The establishment of a Charitable Incorporated Organisation was unanimously approved.

IAEH founding members Iain Edmondson from London & Partners and Devorah Blumberg from New Zealand Major Events said that the vote is a milestone in the association’s development.

Edmondson said: "The agreement from members to incorporate the IAEH is a huge step forward for us as an association. It signals that we are globally aligned in our thinking as event hosts. The formalisation of the association provides a platform for growth as the global network for sharing our knowledge".

Blumberg went on to say: "The incorporation of the association will also provide members with an international shared voice for hosts of major events. We invite cities, regions and countries that aren't already involved in the network to join now and enjoy the benefits of working with peers on a global scale.

The membership discussed nine priority areas for knowledge sharing and the calendar of meetings for the period ahead. Of the priority areas for discussion the group identified a clear front runner of interest to event hosts - measuring economic and social benefits. Other subjects which were front of mind for members included attracting visiting tourists and alternative sources of funding. Members will discuss these priority areas in greater depth as part of the IAEH work programme.

Throughout 2017 IAEH members will have four more opportunities to meet ahead of the Annual Forum in 2018 which is usually timed with SportAccord Convention. IAEH members also met at Host City 2016 in Glasgow. Members see these meetings as valuable opportunities for sharing experiences from hosting major events with a focus on overcoming challenges and measuring success.