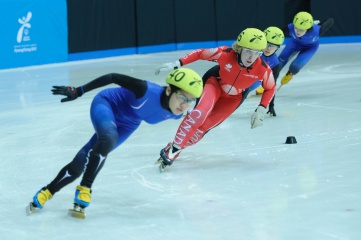 Through the global media reach of the Special Olympics World Games, host cities can signal their commitment to a socially inclusive world that celebrates all abilities

The Special Olympics World Games have changed a lot since they first began in Chicago, Illinois nearly 50 years ago. What started in 1968 as a one-day athletic event has expanded into a week-long empowering competition for thousands of athletes of all abilities. This ground-breaking movement for people with intellectual disabilities now spans the globe – every region, every continent – with more than five million athletes in more than 172 countries.

And, while local Special Olympics competitions happen every day around the world, it’s the World Games that leave the biggest and most inspiring legacy for the athletes who participate and, especially, the nations that host.

“No event has the social value and direct impact of the World Games,” said Lou Lauria, Special Olympics Global Chief of Games and Competition. “That’s because the Games are about more than sports. They’re about humanity.”

“Governments see how the Games have a positive impact that lasts long after the competition ends,” added Lauria. “We leave a legacy of inclusion and understanding that carries over into each community, plus in areas like education and health.”

At the most recent Special Olympics World Summer Games in Los Angeles, more than 6,200 athletes from 165 countries competed in 25 sports. With nearly 2,000 coaches, 10,000 volunteers and an estimated 500,000 spectators, the 2015 Games set records for participation and enthusiastic fans in the stands. Millions more tuned in remotely, watching the Games nightly on ESPN, ABC-TV, and networks in more than 190 countries around the world.

“This has been a seminal moment for our company," said John Skipper, ESPN President and co-chairman of Disney Media Networks. “We are extremely proud of this work and our role. It has had a profound impact on our employees, and we cannot thank you enough for letting us work with you on this incredible event and bring it to fans across media and around the world.”

The excitement was magnified by high-profile corporate partners – including Coca-Cola, Microsoft, Bank of America and Toyota – whose video and commercial tie-ins starring Special Olympics athletes brought even more attention ahead of Games, during and afterwards. The LA2015 Games also broke social media records, racking up 20 billion impressions in multiple media worldwide.

Tim Shriver, chairman of Special Olympics International and son of founder Eunice Kennedy Shriver, says he’s seen first-hand how – for the cities, states and nations who host the Games – Special Olympics can positively transform their society.  “From China to Greece, from Ireland to Korea and beyond, each host country that embraces these Games shows the world their recognition of the value of every human being.”

He adds, “We’ve seen over and over again how the World Games are proven to trigger positive societal changes in ending discrimination and breaking down fear of difference.” Shriver recalls how the 2007 World Summer Games in Shanghai marked a turning point in the country’s attitudes toward people with intellectual disabilities.

Similarly, the 2003 World Summer Games – the largest sporting or cultural event ever held in Ireland – united the country as never before during the Games, and left an indelible change in attitudes and understanding afterwards. “The spirit of the Special Olympics movement has a power that cannot be imagined until you come directly in contact with it,” said Bertie Ahern, Ireland’s prime minister (Taoiseach) during the 2003 Games.

“It was wonderful to see that we all can change the world to be a better and more inclusive place, when we treat each other respectfully and most importantly: have fun together,” said Austria’s Federal Minister of Social Affairs Alois Stöger.

With more than five million athletes worldwide, Special Olympics has come a long way since those 1968 Games at Soldier Field. The organization now includes Special Olympics Health programs, which help fill a crucial gap for people with intellectual disabilities, who often get inadequate health care – or none at all. There are also Athlete Leadership and Young Athletes programs, expanding all around the world.

While Special Olympics has always stood for inclusion, the goal for the next 50 years is to multiply the power of Unified Sports, which brings together people with intellectual disabilities and those without. For Tim Shriver, this means nothing less than a worldwide “Inclusion Revolution.”

“Every single Special Olympics event creates a unified culture that welcomes and values difference,” says Shriver. “Now we’re inviting people to #ChoosetoInclude – and they’re answering the call – in more than 170 countries around the globe. It’s how we’re building a better, more inclusive world, one volunteer, one coach, one country at a time. It’s the revolution everyone wants to join!”

The next World Games are set for March 2019 in Abu Dhabi, United Arab Emirates. UAE is breaking new ground as the first to host Special Olympics World Games in the Middle East/North Africa Region.