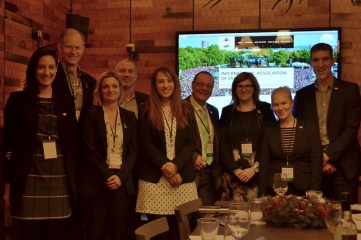 On the evening of the 21st of November 2016 IAEH (International Association of Event Hosts) members met in Glasgow after a day of activities at the Host City Conference. The closed meeting happened at a private room at the Corinthian Club in the city.

Updates on membership, content sharing and partnerships were the main points on the agenda. Future meetings and further actions were also discussed. IAEH is actively signing up new members and establishing partnerships to share expertise via its network and online portal (www.eventhosts.org).

Since the last formal meeting of IAEH, in August 2016 at Rio de Janeiro during the Olympic Games, the number of IAEH members has doubled. The Association now has 20 members representing cities, regions and countries across the world. Glasgow Life, represented by Ian Hooper, joined the Association during the Host City Conference and further members, including representatives in Asia and Africa, are expected to be confirmed in the near future.

Members will next be attending the International Sports Convention in Geneva, Switzerland on the 7th of December 2016, and the next formal meeting of the Association will be the Annual Forum scheduled to be held on 3rd & 4th April 2017 in Aarhus, Denmark.