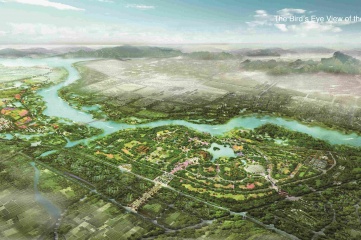 AIPH explains how an international horticultural expo has a positive and lasting impact on the hosting region in economic, commercial, social and cultural terms

Since the 1950s, the International Association of Horticultural Producers (AIPH) has been approving international horticultural exhibitions as the pre-requisite for an event to receive the recognition of the International Exhibitions Bureau (BIE). Through this official approval process, hosting countries and regions gain the ability to invite the participation of other nations through the very highest diplomatic channels.

In 1960 the first AIPH-approved international horticultural expo was held in Rotterdam, the Netherlands. Over the ensuing sixty years, AIPH has approved thirty A1 world horticultural expos, around the globe, attracting millions of visitors for the benefit of gaining knowledge and inspiration of the positive power that plants and flowers have on the lives of a region’s population.

Profusely aware of the multitude of benefits that world horticultural expos bring to a host region, the Netherlands hold a Floriade every ten years. In 2022, Expo Floriade Almere will be the sixth international horticultural expo to be held in the country.

Floriades play a critical role in the development or regeneration of a city. Hosting a Floriade stimulates significant regional infrastructure investment which initiates a boost to the region’s trade, industry, international relations and even education.

Floriade 2012, held in Venlo, testifies to the long-term benefits a region can reap from hosting an international horticultural expo. Since hosting the Floriade, Venlo has experience on-going levels of economic growth above the national average. The project also led to the establishment of two new university campus sites which today attract talent and skills, of all age groups, to the region. The location has become a thriving community of development and innovation.

Hosting the expo also provided a powerful means for branding the region, achieving national and international recognition and establishing a strong and purposeful reputation. Venlo is now familiar not only to the horticulture industry but also beyond. Obtaining a strong sense of regional identity also had the impact of strengthening a sense of social cohesion within the area. As a ‘cradle-to-cradle’, project Floriade 2012 has created significant lasting benefits across numerous areas, including employment, innovation and education, for many generations to come.

Alongside AIPH’s role for approving international horticultural exhibitions, AIPH’s work in Green City involves spreading awareness of the AIPH Green City Concept and supporting city greening through AIPH Green City Guidelines. The objectives of international horticultural exhibitions are synergistic with AIPH’s Green City work. The growing imperative to address salient issues of climate change, air pollution, biodiversity, mental health and social cohesion can be directly addressed through the development of green cities. As stronger evidence builds daily to prove the direct correlation between plants and flowers and a healthier and happier place to live and work, cities around the world are embracing the concept of city greening. Through AIPH’s Green City Concept and approved international horticultural exhibitions, AIPH supports cities in developing their genuine commitment to becoming an internationally recognised green city. AIPH’s global platform for disseminating knowledge; sharing studies, research and best practices; for enabling discussion and encouraging networking offers the unique opportunity for galvanising the pace of ‘living green’ infrastructure development with the multitude of benefits this brings to a region.

A1 class events are major, large scale world horticultural exhibitions that are held for a long duration of three to six months. AIPH approval and subsequent BIE recognition gives organisers the authority to invite the participation of other countries through the highest diplomatic channels. A country is allowed to organise one A1 horticulture exhibition every ten years. The minimum exhibition area is 50ha, the minimum number of participating counties is 10 and applications are required 12 to 6 years before the event opens. AIPH approved A1 exhibitions have been held in the UK, the Netherlands, Germany, France, Turkey, Japan, China and Thailand.

The next AIPH Approved (A1) world horticultural expos are:

B class events are horticultural exhibitions with international participation, held for three to six months. These are organised more at city level, rather than involving national governments. International participation is secured through city to city contact. The minimum exhibition area is 25ha, the minimum number of participating counties is 10 and applications are required 10 to 3 years before the event opens. AIPH approved B class events have been held in France, Germany, China, Japan and Canada.

C class events are held for the purpose of inspiring and entertaining the public. They are held for a period of between four to twenty days. The minimum exhibition area is 6,000m² and the minimum number of participating countries is 6. Applications are required 5 to 0.5 years before the opening of an established show and 5 – 1 years before the opening of a new or non-annual show. AIPH approved shows include Floralies in Nantes, France.

D class events promote trade, innovation, development, knowledge sharing and networking in the global horticulture industry. These B2B events are often held annually and there are no restrictions on their duration.  A minimum of 60 per cent of exhibitors must be involved in horticultural production or supply, exhibitions can incorporate symposia and applications are required 5 to 0.5 years before the opening of an established exhibition and 5 to 1 years before the opening of a new or non-annual exhibition. AIPH approved trade exhibitions include Flormart (Italy) and GreenTech (the Netherlands).

All AIPH-approved events are regulated, monitored, supported and promoted by AIPH to ensure that the highest possible standards and recognition are achieved for the benefit of organisers, participants, visitors and citizens of the hosting region.

AIPH is committed to championing the power of plants around the world and welcomes the partnership of any city that is committed to developing its horticulture industry, ‘living green’ infrastructure and has the ambition to bring the AIPH Green City Concept to life.

This article first appeared in the Spring 2019 issue of Host City magazine. Tim Briercliffe, Secretary General of the International Association of Horticultural Producers is speaking at Host City 2019