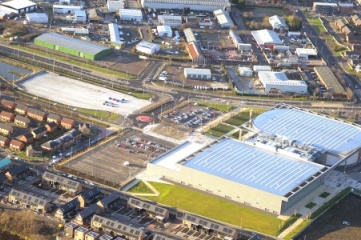 The athlete's village, Emirates Arena and Sir Chris Hoy Velodrome are all part of the redevelopment of Glasgow's East End. (Photo: Glasgow 2014)

Glasgow City Council have revealed how their Commonwealth Games legacy strategy has already had a major impact on the city, including £200 million of contracts secured for Glasgow companies through the Games.

The council claim the ‘Glasgow Legacy Story’ has already made impacts on Glasgow’s economy and infrastructure as well as boosting sports participation in the city. 550 jobs have been created directly through the Games and 4,500 young people have been put into work or training due to Games related investment, according to the council.

The development of Glasgow’s East End was also highlighted by the council and the 700 houses and flats that have been built as part of it as well as the £700 million invested in the city’s transport infrastructure.

As well as the effects on the local economy the Games have brought with them a participation legacy to Glasgow. The council boasts an 130% increase in cycling in the last 5 years thanks to a £10 million spend on 13.6km of walking and cycle networks as well as a city-wide mass cycle hire scheme.

"The Games have undoubtedly seen a huge surge in Glaswegians taking part in sport and we're fortunate to have some outstanding clubs, offering a wide range of sports and activities for all ages and abilities,” said Councillor Gordon Matheson, Leader of Glasgow City Council.

"To further build on this success, we have invested £198 million in sports facilities across the city including those currently serving as Games venues since 2009. During this time, attendances across all of Glasgow Life's sports facilities have surged to 6.6 million.”

"We want to host the best ever Games, but I've always said we will have failed if we don't leave a lasting legacy for Glaswegians."