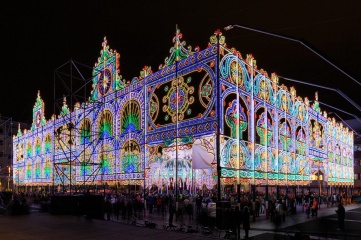 The EUROCITIES Culture Forum demonstrated how Eindhoven and 's-Hertogenbosch are benefiting from investing in culture, technology and events

The spring EUROCITIES Culture Forum, held on 16-18 March in Eindhoven and 's-Hertogenbosch, focussed on “Technologies as a game changer for culture” and the concept of “eventfulness”.

The forum examined the links between art, science and technology, and explored through practical experiments how the “triple helix” concept applies to culture in cities.

Through the discussions and work sessions, city delegates learned about Eindhoven’s transformation through a combination of technology and creativity.

The founding of the Philips company in 1892 positioned Eindhoven as a major technological, industrial and design hub. When Philips closed down in 2000, the 270,000m2 Strijp industrial area, formerly home to the Philips offices, was turned into an art and technology hub dedicated to everything from research and development to cultural production and display.

Strijp-S has become the high-tech creative and cultural centre of Eindhoven. Since 2008 'Cultuurfonds Strijp-S', a public-private fund, has been supporting initiatives, events and programmes in the Strijp-S area and contributes to its national and international reputation.

“Experiments” and “experiences” are key words for culture in Eindhoven. Culture is understood in its broad sense. In Eindhoven there is a focus on living laboratories where creatives, businesses and education work together intensively on innovative products and projects, in which new technological applications are tested.

Using the concept of “Eventfulness”, the city of ‘s-Hertogenbosch deployed an integrated model to set-up world class events.

A team of restoration experts was convened to convince museums around the world to lend their paintings for a unique retrospective celebrating the 500th anniversary of the death of local painter Hieronymus Bosch.

Tickets for the exhibition have all sold out and Bosch's works are inspiring many other activities throughout 2016 with music festivals, art, dance performances in public space and light projections.

“If you invest €1 in culture you get €5 into the city and €20 into the country” said Anton Rombouts, mayor of ‘s-Hertogenbosch.

After an unsuccessful joint bid for European Capital of Culture 2018, the cities of Eindhoven and ‘s-Hertogenbosch, together with other cities from the Brabantstad network of cities and the Brabant province, continued working together, joined forces and created a fund for culture called ‘Brabant C’. The aim is to boost the national and international attraction of the Brabant area by strengthening art and culture.

Culture and the arts also play a key role in the integration process of newcomers in cities. Getting involved in cultural projects activates a sense of community and belonging and cultural projects give migrants and refugees the chance to make a contribution to their host societies.

Delegates learned how cities’ cultural administrations can create situations for mutual learning and intercultural dialogue; develop bottom-up programmes; and train their staff to better address the needs of a diversified society.

The next EUROCITIES culture forum will take place in Oulu, Finland from 5-7 October, and will focus on cultural education and culture for children.