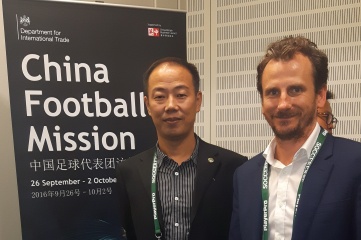 In all sectors, we gain invaluable experience from working alongside skilled professionals from overseas. This brings all kinds of benefits – and sport is no exception, except for the fact that it is structured around international competitions.

Does foreign talent in leagues really overshadow the development of national teams, or is that just an excuse for other issues around local football development? And what difference would quotas make, if any?

Everyone seems to have a view on these subjects and there were plenty to be heard at Soccerex Global Convention.

“The English Premier League was set up with a very specific objective: to improve the England team. Clearly that hasn’t happened.

“Can you have the best league in the world and the most successful team? Of the countries that have tried to do that I think Spain has got the closest to managing that, but I think here we haven’t managed that.

“And I think we need to give more thought to that, because a strong national team is something that builds pride in football and boosts participation at the grass roots.

“In the 25 years of the Premier League we’ve had one semi-final, at our own home European championship in 2016.

“Could Brexit mean something different for football? Could Brexit mean that English football takes a step away from the European directives in relation to free movement in sport - and could we look at introducing quotas for our homegrown players, so that the Premier League doesn’t become a playground for the world’s best talent, but actually we make sure that we bring through more English homegrown players in our domestic league.

“We look at the European Championships in France in the summer and I observed the England team’s disappointing performance, and it seemed to me that there was a lack of heart; a lack of hunger, or desire. And you have to ask the question; is that something that the modern game is increasingly bringing – a sense that there’s nothing playing for, because these players have it all.

“And you look, by comparison at Wales, at Iceland and Slovakia, and there was a different sense of team spirit. I think the game also has to ask where its priorities truly lie.

“The nature of the game has changed, I believe, since the 25 years that the premier league started.”

“I think there are conflicts for some clubs; they want to have more international players.

“Personally I think there might be some problem, because the Chinese coaches have no chance to practice. It’s the same for the national team; if all the strikers are foreign, we have no good strikers.”

“In my experience in the Chinese Super League they have a four plus one rule: four foreign players that can come from outside Asia, plus one Asian player.

“That might change to three plus one, from January 2017. The league below can have only three foreign players full stop.

“For the league below there is no restriction – apart from one important thing: no foreign goalkeepers allowed.”

“Quotas can work for under21s, but they are not suitable in Europe. In France, for example if you were to say you were to have five French and six European or whatever, I don’t think this would work.