Home
»
News
»
Denmark: a country with a view 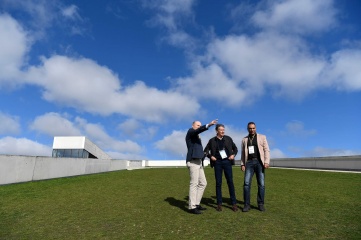 Denmark is looking ahead to a sweeping vista of sporting events, writes Eline Andersen of Sport Event Denmark

What do you see when you scale the grass roof of the Museum of Moesgaard in Aarhus? You see the Danish landscape; you see part of the course of the upcoming IIAF World Cross Country Championships; and you see a country with a view. A view to great international sporting events.

Together with national federations and Sport Event Denmark, Aarhus has hosted a long list of major international sporting events.

Aarhus is just one of many active host cities within Denmark. Other Danish cities – Copenhagen, Herning an Odense – all played hosts to some of the greatest world championships this summer. The IIHF World Ice Hockey World Championship, The ITU MultiSport Festival and the Sailing World Championships were staged in Denmark in 2018 alone.

The Danish record of accomplishment was evaluated by IOC president Thomas Bach on his visit to the Sailing World Championships in Aarhus. "Denmark has proven to be a world-class organizer. No-one in the sporting world could have any doubts that Denmark could organize a fantastic Olympic Games, organizationally and logistically," he said in an interview with Ritzau news agency.

Lars Lundov, CEO of Sport Event Denmark appreciates the compliments from the IOC-president, even if the Olympics are not on a Danish agenda.

“We have gained invaluable experiences through the staging of sporting events in Denmark. Sport Event Denmark as the national sporting event organization acts a knowledge bank and accounts for the future investments in bids for and organizing events for the international federations,” he explains, stressing that host cities and the national federations are vital in the collaboration.

In 2019, Denmark will host new events that will benefit from the experiences gained from the previous events staged in Denmark. The IAAF World Cross Country Championships is among those on the 2019 calendar.

The IAAF World Cross Country Championships is one of the world’s oldest running events. The event will be staged in March on Danish soil on and around the Museum of Moesgaard in Aarhus. The course will include running across the sloping grass roof of the museum.

The local organizers are currently developing an innovative concept for the event. The aim is to boost the championships to focus on cross-country running, nationally and internationally. In addition to the world championships, there are plans for supporting races for schoolchildren and a mass participation race.

The Danish vision has already attracted much attention from both the International Athletic Federation, IAAF and the international World of Running.

IAAF president Lord Sebastian Coe visited the innovative course and told the organizers: “It is really, really exciting because it will showcase our sport in an innovative, modern, exciting setting but also show that cross country is a tough sport, and it returns it to what I will describe as a traditional cross country course with the surrounding landscape.”

The view ahead of major international sporting events in Denmark is looking good as Danish host cities, together with Sport Event Denmark, keep bidding for more to fill the pipeline.

Sport Event Denmark is the national Danish sports event organization. Established and supported by the Danish Government. The objective is bidding for and hosting world-class sporting events in Denmark, for example World- and European Championships in different sports as well as major sports congresses. Sport Event Denmark works in close collaboration with the Danish host cities and the national governing bodies. Today Denmark is one of the leading countries in terms of hosting world-class sporting events (in top-15 globally according to SportCal).