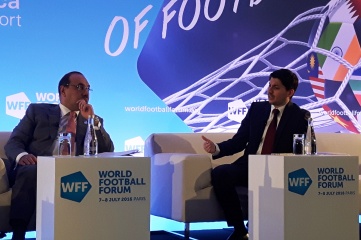 Host City heard from leaders at the Qatar Football Association, Qatar Stars League, FIFA and Eurosport about what hosting the 2022 World Cup might do for people and sport in Qatar

Qatar may be under scrutiny for treatment of workers as it invests US$200bn in infrastructure projects before the FIFA World Cup in 2022, but senior figures in football administration point out that the event is an important part of the country’s process of human development.
“The government of Qatar made a clear vision in 2008 to transform from being dependent on natural resources and they aim to be an economy based on knowledge and people. As a result, well-being becomes the number one priority of the nation,” Mushtaq Al Waeli, Executive Director, Strategic and Institutional Development, Qatar Football Association (QFA) tells delegates at World Football Forum in Paris.
This development plan, National Vision 2030, has four pillars: economic, human, social and environment – and football is a key element of that vision.
“Through sports you ensure people are engaged in physical activity. It’s also a vehicle of social cohesion and integration,” says Al Waeli.
“The social structure of the country is based on people coming into the country from different cultures. Integration is key. Sports – football in particular – has that magic and charm of bringing people together.”
Bidding for the FIFA World Cup was a statement of intent to put the Middle East on the world stage – not just for the nation but for the region. “When we started the bid process in 2009, the message to the world was clear: this is not just a tournament for Qatar,” says Al Waeli.
“We are united with the region – the Middle East and western Asia. The message is to say we have the right for this major event to come to our land and it will be an amazing tournament – from the visitor experience to the field of play.
“We are also delivering legacy: a physical legacy of venues, and also contributing to how to prepare for any event that comes beyond or before the World Cup. We are creating a new process of developing sports and events.”
But the World Cup is about much more than sports events for the host nation. “I think Qatar has made all that effort and bid for the 2022 tournament – not only showing the great passion that the nation has for football and to bring the tournament to the region – but also to drive the progression towards realising National Vision 2030. It’s a catalyst, a key milestone,” says Al Waeli.
However, the value of the 2022 World Cup in Qatar in is rarely presented in such a positive light in the media. Few people feel this more acutely than Alexander Koch, FIFA’s Head of Corporate Communications.
“We are working very hard in order to leave a positive legacy of the events,” he points out. “Looking at Russia in 2018 and Qatar in 2022, I could talk for an hour about all the efforts that are being done and all the progress being achieved with this new focus. We hope that these positive elements will find their way into the media,” he says.
“When it comes to Qatar, we are being criticised for worker’s rights situation, for environmental aspects: how can you play in a desert country; what is the legacy; why are you going where there is no football tradition; and so on.
“But you can turn this all around and see what the legacy will be in an event like Qatar, and what the actual effect is for the people and the foreign workers in a country like Qatar.
“Do you really believe that this is negative, with all the media attention and for the first time ever people have a contract signed by the international trade union and Amnesty International and so on?”
A “Workers’ Cup” has been set up for people working on World Cup venue construction projects. Attendance has been high, with around16,000 people having attended matches so far.
Khalifa Al Haroon, Executive Director, Marketing and Communications, Qatar Stars League says: “We aim to be as inclusive as possible. That’s why we are organising the Workers’ Cup. Any company that wanted to compete had to sign up to the Workers’ Charter, to makes sure human rights are upheld – and to give these people the opportunity to become players. This is something we will be continuing as long as possible.”

A ladder to the stars
Qatar is the only country that has a National Sports Day that is a national holiday when everyone takes a day off to take part in sport. The country also stages a number of other different community events, such as the Asian Communities Football tournament.
“We are creating different levels of leagues, from professional to amateur, to encourage people to play the sport and maybe be future superstars,” says Al Haroon.
Crucial to the creation of Qatar’s potential future football stars is the Aspire Academy, which is open to the general public.
“The QFA is focussed on training players on how to invest their income. It’s not just about football; it’s about creating an industry that didn’t exist four years ago.
“We won the AFC U19s in 2014 and hosted the AFC U23 in 2016, which we were told was the best organised. That knowledge is being passed on to the players and the general public.”
Mushtaq Al Waeli says: “I had the honour to be part of the Aspire Academy’s creation. The first youth that joined went on to win the Asian Youth Cup, so the system proved that it’s working.
“The elite from the clubs, we bring them to a different part of the academy so they play with the best teams in the world. We work on creating a holistic player who is ready to compete anywhere in the world. If we qualify for the 2018 World Cup you will see players that came through that system.”
Even if Qatar doesn’t qualify for the 2018 World Cup it will automatically qualify for 2022 as hosts. But is automatic qualification necessarily a good thing for the country? Peter Hutton, CEO of major broadcaster Eurosport is not convinced that Qatar will be ready to compete at that level.
“You have to be realistic – it’s important to play teams that are in the same sort of FIFA team rankings area as you, and to have targets that are just above you and look to achieve target by target.
“What’s not helpful is to go to an international tournament and then be wiped out, because your whole sense of identity with your country as national football pride actually falls apart.
“And that’s the concern for Qatar – how will the Qatar national team play when they get to the World Cup, because if they don’t do well, then that can be negative story.”

The Josoor Institute
Mushtaq Al Waeli is acting director of the Josoor Institute, a centre of excellence for the sports and events Industries.
He says “Josoor is an Arabic word that means bridges. We wanted to connect the knowledge of the present, the past and the future.
“It’s all about knowledge. We are not just a training institute. We aspire to become a centre of excellence. We develop knowledge through research, we embed knowledge through training and education, and we consult on the future.
“We created Josoor when Qatar won the right to host the 2022 tournament. They set up a government vehicle called the Supreme Committee of Delivery and Legacy, to keep our promise that we will deliver an amazing tournament in the best possible time. We also wanted to create excellence in human capital development; that responsibility was given to Josoor.
“Our remit is not for Qatar only. We want to reach everybody who has an interest in working in sport or event industries or wants to move from one academy to another.”
Launched in 2013, the Josoor Institute delivers a set of products, including certificates and diplomas, working with partners in Qatar and overseas, including leading educational institutions.

This article was written by Ben Avison of Host City at the World Football Forum 2016. The comments from Mushtaq Al Waeli and Khalifa Al Haroon were made in conversation with Simon Chadwick, Professor of Sports Enterprise, Salford University