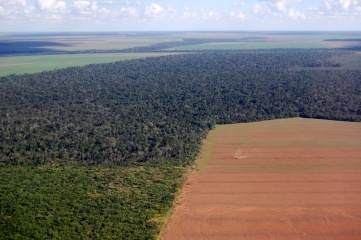 Brazil is shortly to overtake the US as the world's largest exporter of soybeans, much of which are grown on cleared forest land. The FIFA initiative will help to reverse such trends

Fans holding tickets for the World Cup in Brazil are being encouraged to offset the carbon emissions caused by their travel to the tournament.

A programme launched by FIFA on Thursday allows successful ticket applicants to sign up on a carbon offsetting page on FIFA.com, where they can enter a prize draw to win two tickets for the World Cup final.

FIFA is bearing the cost of the carbon offsetting; all that is required is a FIFA.com Club account and a successful ticket request reference ID.

The owner of the flagship event of the world's most popular sport will be keen to generate a positive legacy, given the problems Brazil is encountering in the construction and delivery phases.

"As part of our two-fold strategy with the non-profit carbon management programme BP Target Neutral, FIFA and the Local Organising Committee will offset 100 per cent of their own operational emissions and through the campaign launched today, we are encouraging fans to neutralise the carbon emissions resulting from their travel to Brazil.

“At the same time we use the FIFA World Cup as an opportunity to engage with millions of people and raise awareness of the environmental impact of our journeys and the ways to mitigate it.”

In a press release, FIFA acknowledged that “staging a tournament of this scale inevitably has an impact on the environment. Offsetting is one way of limiting this impact.”

The programme is supported by Cafu, the world’s only player to have appeared in three World Cup finals. “It just makes sense”, he said. “Supporting your team and supporting low carbon development in Brazil at the same time is a win-win for all. I am offsetting my travels related to the FIFA World Cup Brazil 2014 and encouraging everyone to do the same. It’s really easy to do and only takes a minute”.

The emissions will be offset through a portfolio of low carbon projects in Brazil, chosen by BP Target Neutral.

“Each project is selected through a rigorous tender process and adhering to the standards set by the International Carbon Reduction and Offsetting Alliance with final selection made by an independent panel of environmental NGOs. The list of the exact offsetting projects selected, all of which result in social and economic benefits to local Brazilian communities, will be announced in June,” says FIFA.