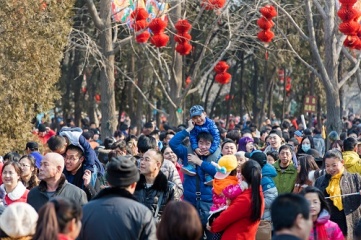 Visitors enjoy themselves at Ditan Park during the Chinese New Year

Beijing’s municipal bureau of culture and tourism today announced the cancelation of “large-scale activities”, in a bid to hold back the spread of the potentially deadly coronavirus.

Events being cancelled include the city’s temple fairs, winter sports events and exhibitions that traditionally take place as part of the Chinese Lunar New Year celebrations.

Big public gatherings in the city’s parks are a major part of New Year celebrations, due to take place on 25 January.

Last year, more than 2 million visitors gathered in Beijing's 11 municipal parks and the Museum of Chinese Gardens and Landscape Architecture, according to state media.

The move follows the shutdown of Wuhan and two neighbouring cities, where the first human outbreaks of the coronavirus originated, 715 miles from Beijing.

The State Railway Group is also offering full reimbursements on tickets in order to minimise the impact of the world’s largest annual movement of people, known as “chunyun”.

Reported cases of the disease now exceed 500, including one near Tokyo and one in Washington State, USA. 17 people have died so far, in China.