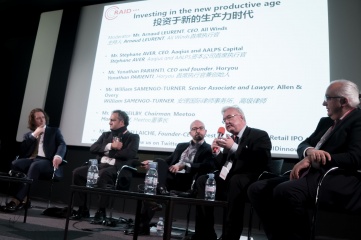 Grant funding for a new film and television studios, to be built on the site of the former High Melton campus of Doncaster College, has been agreed by the Sheffield City Region (SCR) Combined Authority (CA).

On 11 June, at the first meeting chaired by the new Mayor of the Sheffield City Region, Dan Jarvis, CA members agreed that £4.1m of Local Growth Fund (LGF) cash should go towards the project headed up by 360 Degrees Media.

The scheme incorporates a film and TV studios, a visual effects production facility, a film and TV training academy and a hotel and events business. It is projected to create around 220 direct new jobs, and potentially thousands more in the supply chain, while driving more than £60m of gross value added within SCR over the next 10 years.

Mayor Dan Jarvis said: "A creative investment on this scale is fantastic news for Doncaster and the wider region, and will add to the Sheffield City Region's already-outstanding creative assets.

"As well as jobs at the 360 Degrees Media studios, the scheme can also create countless opportunities in the supply chain, drive economic growth and provide real-world training opportunities for our young people.

"But the benefits go both ways. Our region is a hotbed of creativity and is already driving forward excellence in the digital sector. So where better to base a new film and television studio that can tap into the talent we already have here, build upon it, and create a genuinely exciting and innovative scheme to put Doncaster on the digital map."

Sir Nigel Knowles, chairman of the Sheffield City Region Local Enterprise Partnership, was instrumental in the decision by 360 Degrees Media to locate here.

He said: "LGF funding allows LEPs to drive forward economic growth across the country, helping to build a country that works for everyone.

"I am delighted that we were able to use this fund to secure the 360 Degrees Media investment for Sheffield City Region. This is further proof that, as a LEP, we work in a straightforward and practical way to bring in investment and make it easy for companies to do business here.

"I look forward to seeing this project delivered."

360 Degrees Media is managed and operated by media financiers Alistair Maclean-Clark and Mark Beilby, both of whom have more than 30 years’ experience in the sector.

Alistair Maclean-Clark, chief executive of 360 Degrees Media, said: “Ever since we first visited South Yorkshire we knew there was potential for a game-changing project here and we are delighted that the SCR, as well as Doncaster Council and DN Colleges Group, have backed our vision for High Melton.

"We want to pioneer a European first for media that brings together training, production, post-production and innovative tech on one site, offering film and television makers an end-to-end service and a creative ecosystem that will reinforce and help to build all the existing creative industries in South Yorkshire.”

The project has also been welcomed by the council and businesses in Doncaster.

Ros Jones, Mayor of Doncaster, said: “It is fantastic news for Doncaster that the College’s High Melton site is set to become the new home to this international film and TV studio. We have been happy to support the College in bringing this to Doncaster. This will create jobs and growth for Doncaster’s economy and encourage more young people to pursue a career in the Film and TV industry.

“During 2017, £1.6 billion was spent on UK film and TV projects. This shows this is a thriving industry which we are excited to welcome to the town. We are ambitious for Doncaster and fully support the creation of this new site that will create more than 220 jobs for the borough.”

Dan Fell, chief executive officer at Doncaster Chamber of Commerce, said: "The Chamber believes that the project has the potential to be as transformative for Doncaster as the Yorkshire Wildlife Park or Doncaster Sheffield Airport.

"Crucially, the scheme will do much to diversify Doncaster’s economy by attracting overseas investment and students, and by catalysing growth within the creative sector.

"This will make our economy more resilient whilst also engendering a dynamism and buzz about the area.”

Andy Tuscher, DN Colleges Group Chair of Governors, said: "“We are delighted with today’s decision, and we now eagerly await the transformation of High Melton into a world-class hub for media production, placing Doncaster at the heart of the UK’s media sector and directly benefiting our communities through local investment and employment.

"We are thrilled that this development will include an innovative partnership between 360 Degrees Media and Doncaster College to create a Film and TV Academy.

"Having direct access to these state-of-the-art facilities is going to create unparalleled opportunities for Doncaster College students and we are really excited about the employment opportunities this will open up for them, both locally and in the wider media industry.”

By 2021 Government will have invested over £12bn through the Local Growth Fund, allowing LEPs to use their local knowledge to get all areas of the country firing on all cylinders.

There are 38 LEPs covering the whole of England, which are investing LGF money in a wide range of projects including transport, skills, business support, broadband, innovation and flood defences.